I've wanted to get on 160m for the past 35 years or more.  I tried back in the late 80's with a small vertical and one long radial.  While I could transmit, my RX was dismal.  I never logged any DX with that antenna.  From that point on I just continued on with other bands, eventually settling on 6m (50 MHz) for the past 21+ years.  While I ventured into some of the WARC bands during that period I never really did much on HF the past 21+ years.

Last year I built my first Beverage Array it's a phased en-echelon style aimed about 43 degrees and it's almost 800 feet long.  That's when it REALLY hit me what was possible on the low bands.  Until that point I'd never heard any real DX on 80m or 160m.  The first day I hooked up a single beverage I was just astounded.  There are some blog entries from last winter when all that was happening here.

Since that time I worked DXCC on every HF band except I need 6 more on 10m, and on 160m I literally started with 1 DXCC (K).  I used a bunch of 1/4 wave wire verticals for every HF band.  Last winter I was focused on 80m and for that I used an Inverted-L with raise resonant radials.  THAT was FUN to build.  It took a LOT of experimentation.  Mostly because it seems that the documentation scattered around the internet written on the subject of the Inverted-L is really just not very exact.  So you'll see someone saying for 160m the "L" wire should be 127 ft long, another will say 135 ft long, still another may say 165-175 ft long (which appears to be the best I've read so far).

I tried 135 ft long, and that worked pretty well.  I started with 1 long radial on the ground tied to a ground rod.  It worked.  Not awesome, but it was getting me on the air.  I bought 1000 ft of AWG 20 stranded wire and split that up into 16 each 62.5 ft radials.  I created a radial-ring out of #6 solid copper wire, and solder them all to the ring, and then attached the ring to my ground rod.  I pinned some radials to the ground, and others I buried.  I think I buried, or partially buried about 4-5 of the 16, and 2 of the 16 I haven't yet rolled out because they'd be in the way of some foot traffic until I can get them buried.  I also added two 125 ft long radials, with plans to add 2 more soon.  I'm also planning to add at least 8 more radials for this year, and then be done with laying out radials.

This is only a temporary location for this Inverted L.  So none of this is permanent (I think). 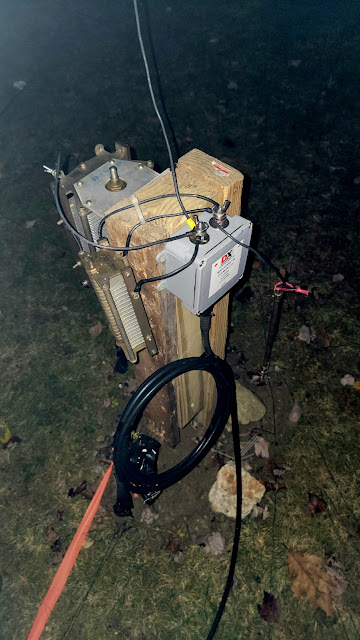 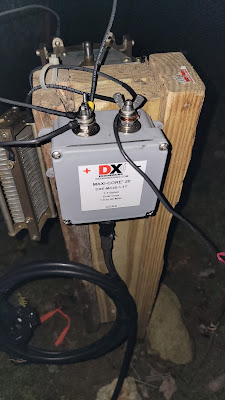 With this arrangement I worked 25 new DXCC on 160m.  I had some really decent plots on PSKR considering I'm basically QRP on 160m with only 200 watts output.

I later read in the ARRL Antenna Handbook that I might want to try 165-175 feet for the "L" wire, and to change the Capacitor to be in-series with the "L" wire instead of to ground. So yesterday I added 30 feet to the end of the "L" wire.  By the book I changed my capacitor(s) around to only be using ONE cap in-series with the "L" wire.  That got my SWR to 1.41:1 with probably around 200pf.  I played around with using the other cap in various ways, but nothing I tried helped.  So I pull my new 10uH variable inductor out, and put that between the (+) "L" wire and the (-) Earth, and I tuned that to the lowest SWR I could get, then I went back to the Cap and adjusted that some more, then I went back to the Inductor and peaked the SWR to 1.16:1. 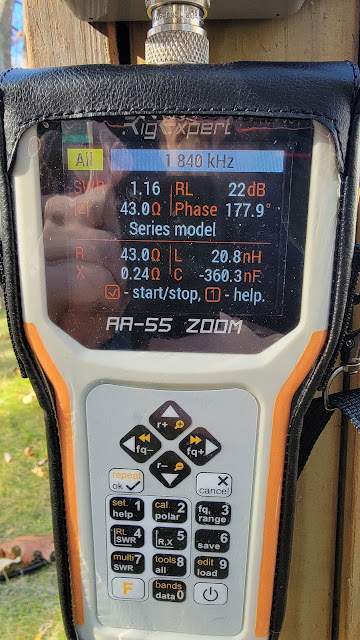 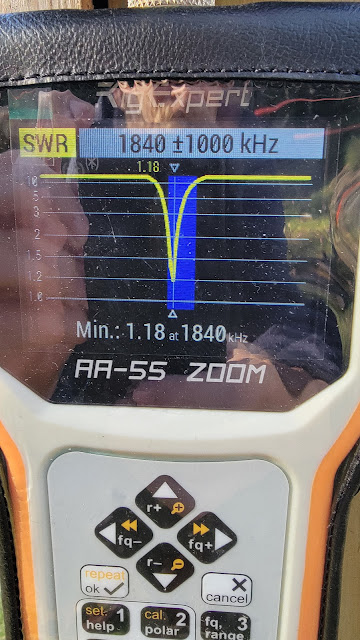 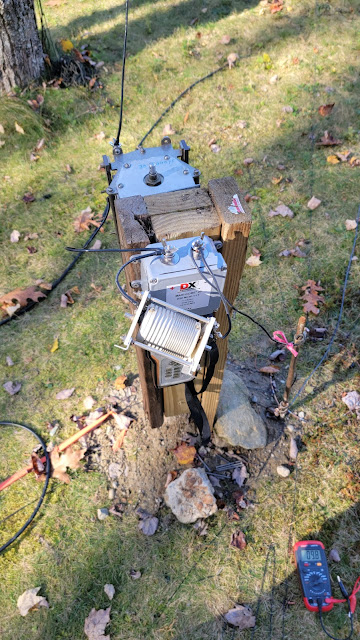 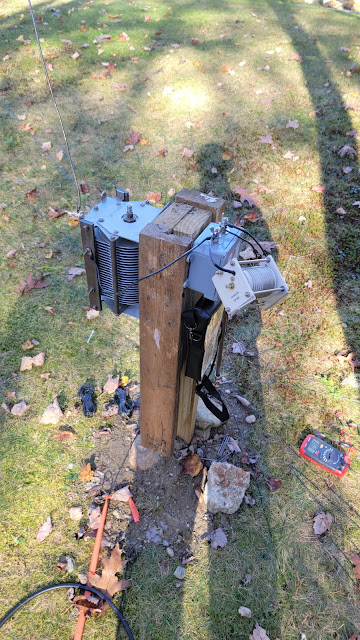 This story isn't over this is probably just chapter 1.  I'm up to 28 DXCC now on 160m, and 34 US States, in about 2 weeks on the band.  Which I think is "OK", I am happy at least.  This is all new to me.  I am constantly learning, and trying new things.  I've already seen glimpses of some of the craziness 160m can present via propagation.  I've been spotted in ZL, I've seen places like 3D2AG, and 7P6RU so I'm doing "OK" at least.
It's a struggle with 200 watts.  I can't imagine how some of the 5w QRPers ever work anything!  There are a LOT of hams on 160m who just don't hear as well as they are being heard.  That is the nature of things on this band tho.  The antenna's are difficult to manage for many.  Just based on their size requirements.  So most antenna systems end up being some sort of combination of compromise for the vast majority I think, and that's OK!  That's part of the challenge.
So my next modification is going to be to put the tuning components in the photo above into a large 'tote' to keep them out of the weather through the winter.
All totaled (a rough estimate) I've probably spent about $400-$450 on this Inverted-L antenna itself.  There's a LOT of copper, and that's not cheap.  The Balun I'm using was the most expensive bit.  And I had thought about building one.  They're fun to build by the way, but this time around I just wanted to get on the air sooner than waiting for all the parts and then building and testing process, so I just plopped down about $125 for for that (including shipping).
My beverages I'm not real sure of the total cost, but I would estimate about $600 or so for the pair, and maybe another $100 in misc. bits.
I'm planning to put up another few Beverages this season.  My next one will cover VK/ZL path but I'm not going to terminate it so it'll also cover S. EU and parts of AF I think.  After that one I'll put another up for JA/BA path.  And ideally one to S. AF, and another to SA if I'm still at this by then LOL.
The experimenting on these low bands is the really fun bit to me.  I don't fully know what I'm doing.  I can't say that what I've done is good or bad really, but it feels better NOW than when I started out, so I'm heading in a better direction and that's good enough for me for now.