I already built an awesomely performing Beverage Array which I'm more than pleased with.  Simple to build, EASY to understand, and doesn't require a lot of precision (Love that!)  So my RX is quite good on 30m down to 160m at this point.  Check the RX box "OK", and move on to the TX'ing.

I think that basic math is right and the theory thereof as well.

When I first built this Inverted L antenna I used my previous 30m Ground plane location.  Which really didn't give me enough height in the vertical section of the "L" wire (the top wire).  So I moved it over to where my 40m GP was located (bummer cause I was doing well on 40m) but this gave me another 10-12 feet of vertical section in the "L" wire which I think is about 32-35 feet now.  The "L" wire started out at 66 feet long.  The radials I used were 69 feet long initially.  That combination gave me an SWR of 1.8:1 as is with no tuning.  And I worked a good fat handful of new DXCC on 80m like that in a few days.

I wasn't content with that SWR.  And the nightmare began!

I had been told and also read that my resonant radials should be at least 8 feet up.  And then I read another very well written document saying that 10 feet would be better.  The idea mostly being to reduce soil absorption.  I also thought (in my own mind) that it might improve the SWR from 1.8 to raise them up.  Initially I had the radials only 4-6 feet up.  Very haphazardly.  They are THHN wire so possibly PVC?  I dunno.  I have to research that a bit to find out.  But it's all 14 AWG THHN wire so far.  (again 66 foot "L" wire, and 69 foot radials is where I started).  OK so I raised the radials up to 8 feet from feed point to ends, and that didn't really change anything.

Next I read that my resonant radial counterpoise should be 'resonant' meaning detach them from the feed point set two of them up like a dipole in their fixed position, and trim until you get the best match.  I did that and ended up trimming about 5 feet off the ends (guessing I haven't remeasured it yet).  That gave an SWR on the dipole "radial" configuration of 1.3:1 the best I could get.  So I cut the other radials to match that length (holding them side by side - again I haven't measured them but I will).  Then I reattached them to the feed point.  Now my SWR wasn't good at all at 3.573 Mhz anymore.  I don't remember exactly, but it was useless!  The antenna seemed to want to have a nearly perfect 1:1 match at like 4.7 Mhz.  So between making the vertical section longer, and the radials slightly shorter, and truly resonant things became unusable.

Because I had a hunch that the radials might be too close to earth at 8 feet up I moved them up to 10 feet.  This made NO CHANGE AT ALL in SWR.  I thought it might at least bump it one way or the other but it didn't.

A good friend of my loaned me two 250 pf air variable capacitors.  I attached them in an L-Network and I was finally able to tune things a bit.  But it still wanted to remain firmly in the 4.0+ Mhz range.

I'm still baffled by this antenna.  And I'm sure I have something wrong yet.

Oh by the way I've been doing all this work through a snow storm yesterday with high temps around 20 F and lows around 7 F and gusting winds, and this morning it was about 5 F with a wind chill of -5 F while I was back out there setting up the "L" network matching setup.

Here are some pix and video of this so far.  Click on the pix for larger versions.

1.7:1 on the old ass MFJ-259
Showing R=33, X=15
"Inverted L - First tests"
Before I made any real modifications.
After significant changes.  But before the final "almost resolved' fix of adding 20 feet to the "L" wire.
Current final pix as of this writing: 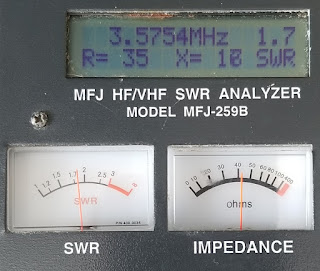 This still shows the "L network" capacitor to ground (the radials) but I've tested without it and there is no change.
Another variant of the "L network" that I discovered while I was trying to find where the system truly is 1.0:1 I bumped the top of the top capacitor in the photo above, while tuning the bottom capacitor, and noticed the SWR went to 1.3:1 and R=50...just by touching it with my finger between the radial(ground) and the top capacitor.
I removed the bottom cap from how I had it and instead routed it to go from the radial(ground) to the "L wire" (and the top of the top cap).  Using it like this I'm able to EASILY tune 1.1:1 SWR as shown below.

Feb 2nd, 2021
Today I added a 4th radial, and I moved the "L wire" up to almost fully horizontal.   Initially I thought since I was able to tune things with variable caps that I would shorten the "L wire" back to 66 ft.  But I was unable to tune even with two 250pf caps as shown above.
I increased the "L wire" back to probably around 80+ feet long.  And I'm able to tune it.  I suspect it needs to be even longer - perhaps 88 feet something like that.  I'm not able to get nearly as good a match with the 4th radial added.    But I'm also aware that the more radials I add the more tuning will 'tighten up'.  Meaning it will probably force me to do a better job with the "L wire".
I'm going to try these changes for a day or two and see how it behaves.

The setting is here: 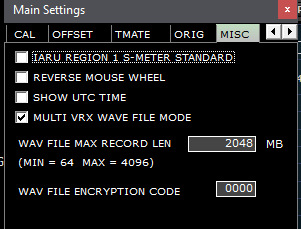 And as a reminder to myself I have to use the following setting to match reports between my FTDX-5000 radio and SDRuno. 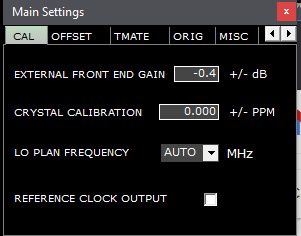 Using these settings the two rigs match up very closely in my usage.

I've been building my 244 meter (800 foot long) en-echelon (end-fire) staggered array little by little, I already had installed the single wire last month, and today I installed the second wire.  WHEW...is all I can say.  It's cold, muddy-snow-wet overcast and I'm sore and super tired now.  BUT!  It's working!  I have some testing to do yet, and some final cleanup left to do.

I also added a common mode choke at the junction point where the RG6 runs back to the shack (and that really seemed to clean things up too).

In my opinion there's really not much to see in photo's for this project.  But I can think of maybe one or to more besides these few.

I found a '0 degree" 0.25 Mhz to 300 Mhz splitter/combiner brand new made by Mini-Circuits on Ebay for $15.00 (I got that one, and the seller gave me a second one for free!) - these normally sell for about $55 new from Mini Circuits so that beats building one.  These are known to be some of the best available from what I've read.

I found it a bit confusing to get solid details on building the en-echelon (end-fire) staggered array.   Even with decent instructions from several respectable sources.  They conflicted with each other.  So I went with what seemed the most logical.

My lines are nowhere near parallel!  but I think based on what I've read that shouldn't matter all that much.  I did the best I could tho, and the wire-lengths, and staggering are VERY close to spot on I think.

When I use my 1/4 wave vertical elevated ground plane I see USA (a fair amount of them), and when I switch to the array ... they almost all drop off or are drastically reduced.  So I think that the lobes are at least close to right :-)

this is the second wire, (look top left you'll see the insulator, look about mid-right for the light-green bucket and that's where the ground rod is close to, as well as the feed-box.

The feed box is under this old bleach bottle-bottom

This is the 0-degree splitter/combiner in place without it's cover, the black box is the feed for the 1st wire

I bought these adapters (it was just easier than trying to put BNC's on RG6.  Is that even a thing?  I searched for them and I couldn't find any so when with adapters for now.

Close up of the combiner/splitter here's a link to the spec sheet https://www.minicircuits.com/pdfs/ZSC-2-1-75+.pdf

Today's opening was the largest of them from this month to EU from FN54.  Covering Italy, Spain, Germany, France, UK, Belgium and others...

I didn't take a lot of screen shots this time, I just spent the time mostly working as many as I could.

I worked G7RAU and heard IS0ZOD on CW.  That was nice! 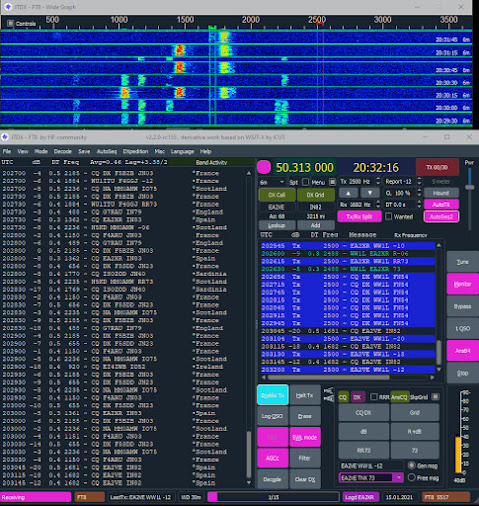 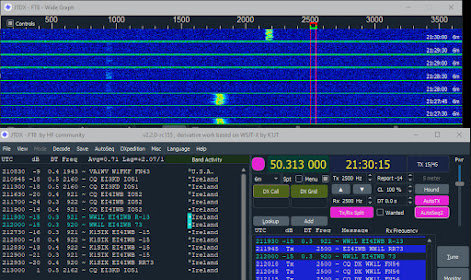 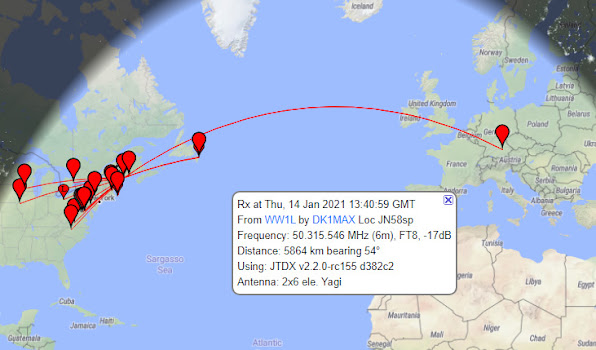 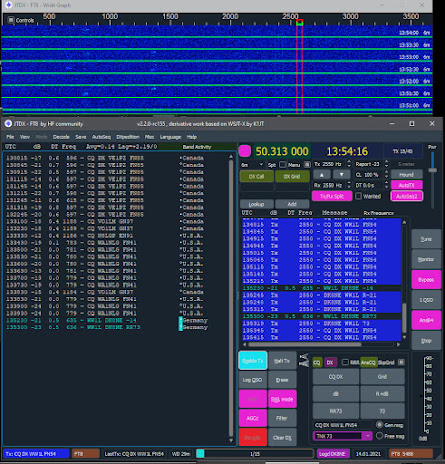 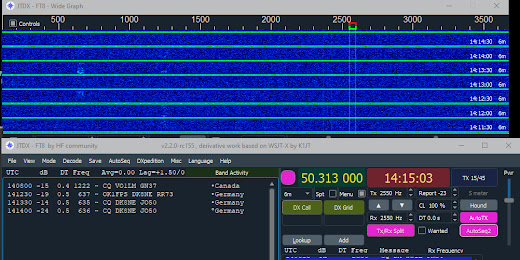 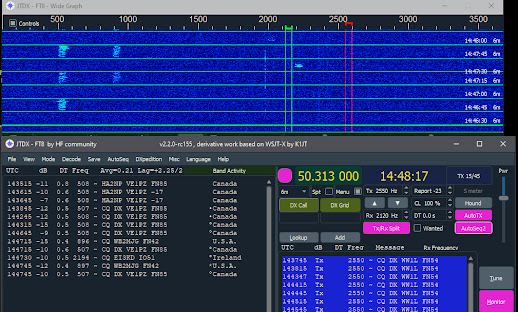 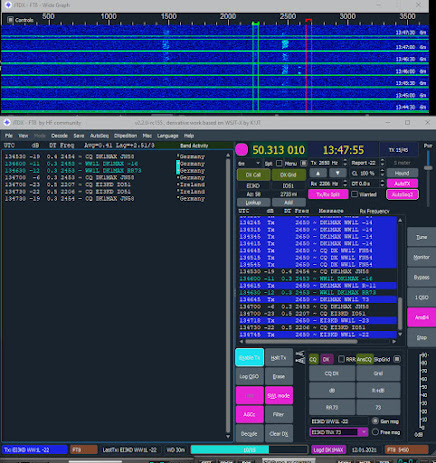 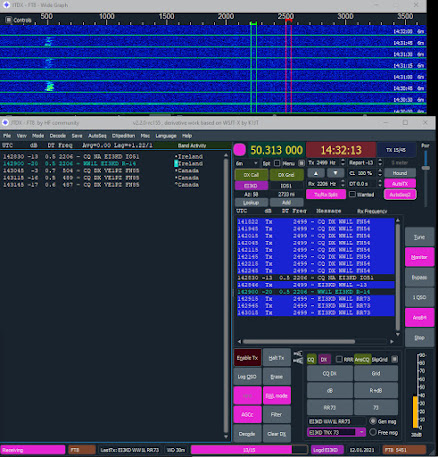