On Sunday I finally got around to modifying one of my Etherkit Si5351a boards to use my Leo Bodnar GPSDO by replacing the 25 MHz TCXO. 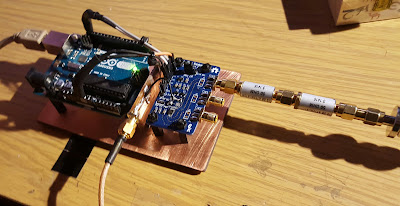 I just used a bit of scrap copper-clad PCB and an edge mount female SMA connector and a short bit of high quality coax (about 1 inch) to jump from the connector to the input where the TCXO was mounted.

The result was a super stable output from the Etherkit Si5351a without any further modification.

It's been my experience on two different Etherkit boards that the TCXO is fairly drifty even with mild temp changes.  In addition for some reason it sometimes 'jumps' about 10-20 Hz randomly (too frequently for my taste often multiple times in 30 seconds) which makes for some wonky resultant CW (Morse code). 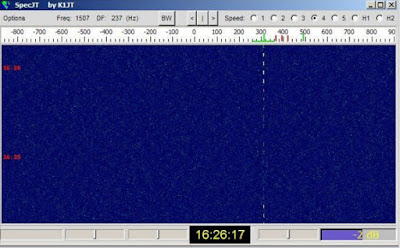 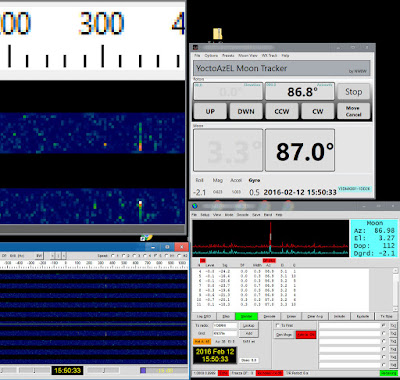 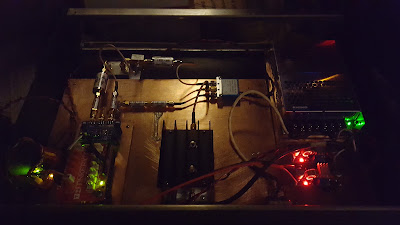 I was able to get this project all assembled and stable now.  It's boxed in a rack-mountable case now too.  I've added it's own power supply.  So it just requires 120vac from a wall socket, and an antenna connected to it to operate all on it's own.

Here's yet another demo video of the current running system.

It's currently running on the following frequencies: 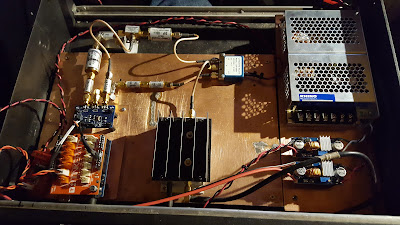 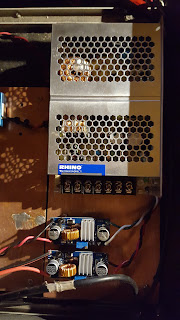 So I've been continuing to improve and expand the little beacon project I've been working on as a winter project this year.

The beacon is now capable of autonomous operation on 4 ham bands 50 MHz, 144 MHz, 222 MHz, and 432 MHz.  It's also able to operate on 902 and soon 1296 as well.  However, I'm awaiting funds to obtain a few more circuit parts needed to make those autonomous in the same loop it operates on now.  I've already figured out and tested 902 MHz.

The code is fairly simple for the Arduino and the new Tinkerkit Shield, and Tinkerkit mosfet.  The mosfet turns on and off a 12vdc relay which switches the output of the Si5351a between two RF paths currently.

These 12vdc relays are fairly cheap and can be found on Ebay for < $20 each.  They're good for about 1 million relay cycles per DowKey.  Which in the loop I'm using would give about 2 years of life if they last that long, or more if they extend past that.

I will eventually replace these RF relays with something that has a longer life span, but for now and for this simple small beacon project this is acceptable considering they're price I think.


Anyway above is a video that shows all of this action.

I am using 3 SDR radio's to demonstrate the beacons operation so that you can see how the 'loop' operates from one band to the next.

The CW being generated is 30 wpm (words per minute) which is fast for a beacon, and I'll likely slow this down to 24 wpm.  But for the sake of a shorter demo I sped it up.

The single antenna being used is a simple 25 MHz to 1300 MHz Discone antenna.  The output power is approximately 100 mW (milliwatts).  These antenna's can handle a fair amount of RF power and they range in price but most are < $100 USD.

I have a small 1.5 Watt RF amp (shows in other video's on this blog) which operates from 0-500 MHz fairly flat across that range.

Once those are added into the loop this will be a 6-band beacon all being run from a single Arduino and Si5351a (with various frequency multipliers).

http://blog.dxers.info/p/arduino-multiband-beacon.html
Posted by Tim H at 12:32 PM No comments:

Etherkit Si5351a beacon and another used for LO down converter

Today I wanted to see my 144 MHz Arduino / Etherkit Si5351a beacon on a different radio.

To do this was fairly simple.  I used my Apache Labs Hermes SDR by feeding it's RX input from the IF output of a simple Mixer.  I used one of my Arduino / Etherkits as a 120 MHz LO.  And the other Adruino / Etherkit as a 144 MHz (2 meter) CW Beacon.

Here's how that went.

http://blog.dxers.info/p/arduino-multiband-beacon.html
Posted by Tim H at 2:27 PM No comments: 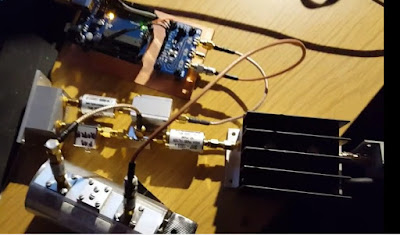 Today I decided to try to get this little beacon project up to 902 MHz, lo-and-behold it works. :-)

During the test I had forgotten I had two 15db pads (total of 30db) on the IF going into the mixer.  Since the signal was so weak with that, on the RF output side, I added a 0-500 MHz 1.5W RF amp before the final Frequency Doubler.  Which worked.

However, after this video I removed the 30db of attenuation, and the RF amp, and it was quite strong.

Still this is a decent demo.

I also show how the almost raunchy 25 MHz TCXO.  I hate TCXO's.  My plan is to remove it, and use a 25 MHz GPSDO and that issue will be gone.  NOBODY likes a drifty beacon.

While it adds expense to the project, it's something I can test with a GPSDO I have on hand...once I've verified it resolves the problem, I'll order another (since I already use my current GPSDO in other projects).