I am running rtl_power from 12 RTL dongles now 100Mhz per device with a resolution of 1.3Khz over 1 minute.

Anyway, after finding that, I decided to put "Impala" to use for the first time for real since I setup the Hadoop/HDFS/Hive/Impala Cluster.

Every hour I import the rtl_power data that's been post processed and placed in LZO compressed files into Hadoop's HDFS using a Hive Loader. (more on that some other time) That puts the data into a Table within Hive.  Impala can search these LZO compressed logs VERY quickly!  So I decided to put this process to the test today (finally).

Using the following commands within about 6 seconds I created the below graph using GNUPLOT which shows what I think are NOAA weather Satellite Transmissions. 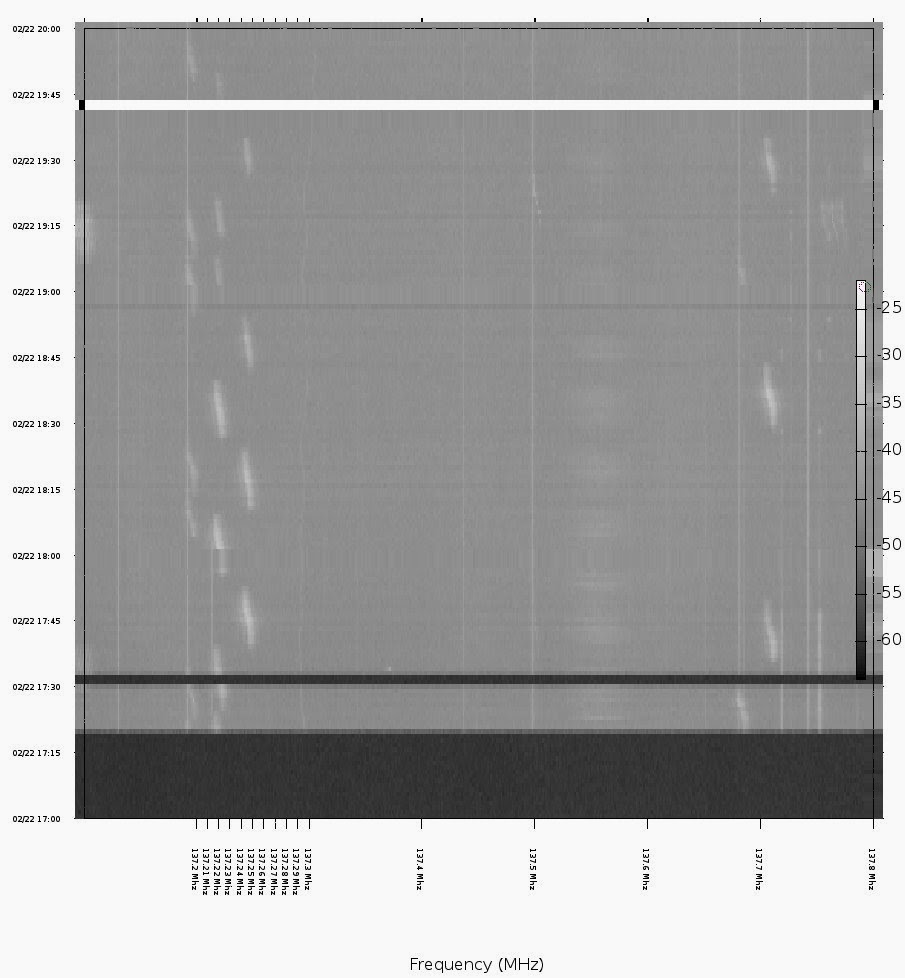 The white line within the graph was when I was testing and calibrating the RTL so it was not generating any rtl_power data during that time.

The two Dark spaces near the bottom are when the LNA was turned off for mainenance.

The 'doppler-like' lines I believe are NOAA and/or MET weather sat's.

Not really sure what this is...the bottom graph is 18z and the top graph is 19z each are 1 hour where the oldest time is at the bottom of the respective graph.

What would be in 137.2Mhz that has a slow doppler shift like this?  I'm thinking Weather Sat's... 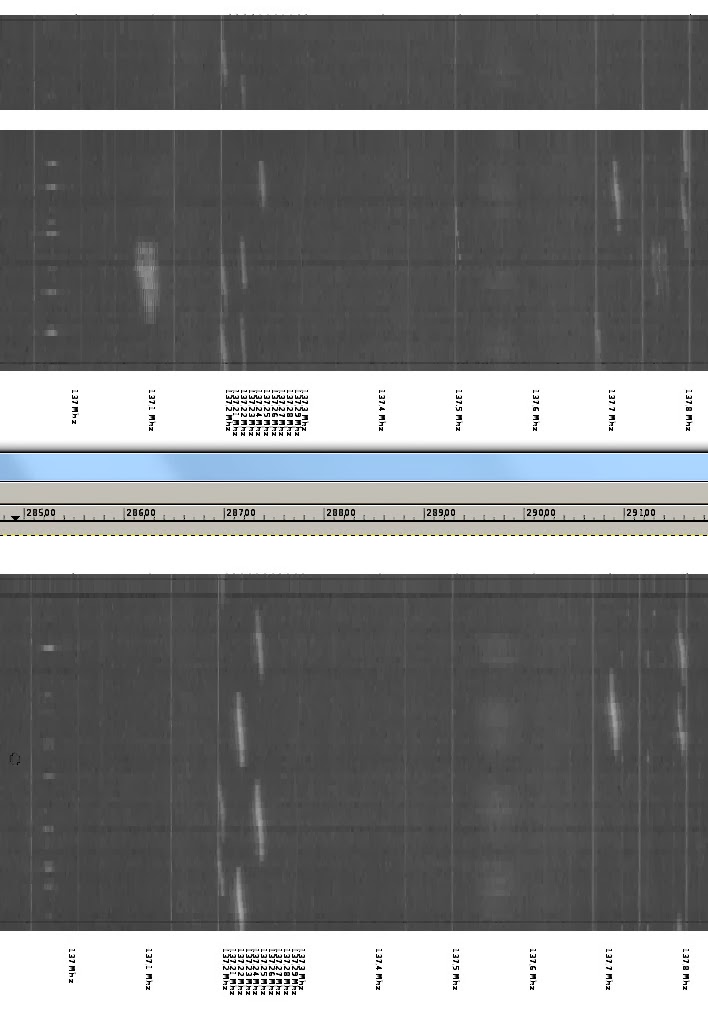 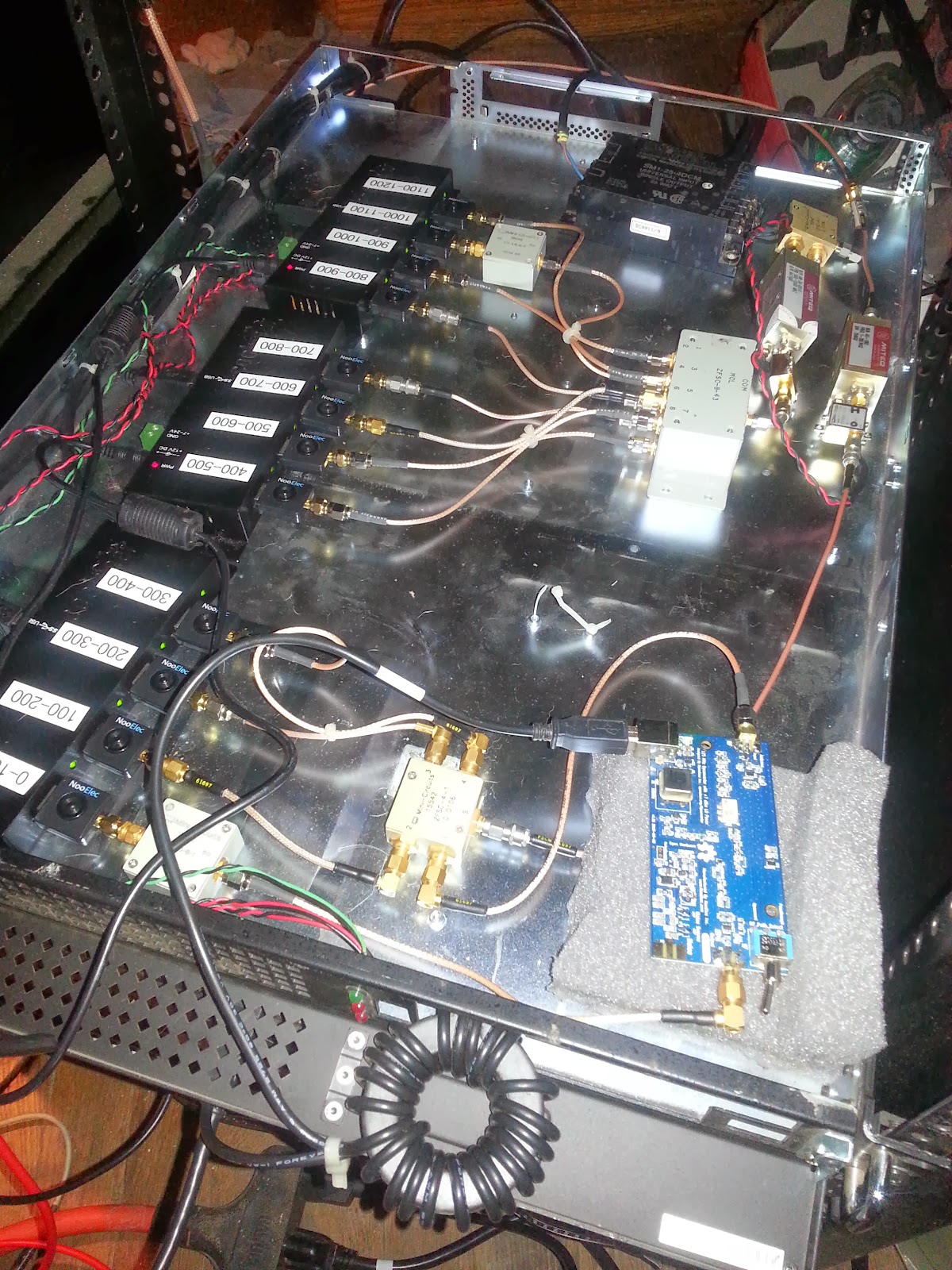 I've got 3 datanodes running Hadoop now in a basic configuration (need more storage drives which are ordered, and also need two new 1gb hubs which are also ordered).  Here is a photo of the new cluster running it's not much to look at, but is a basic functional Hadoop cluster now: 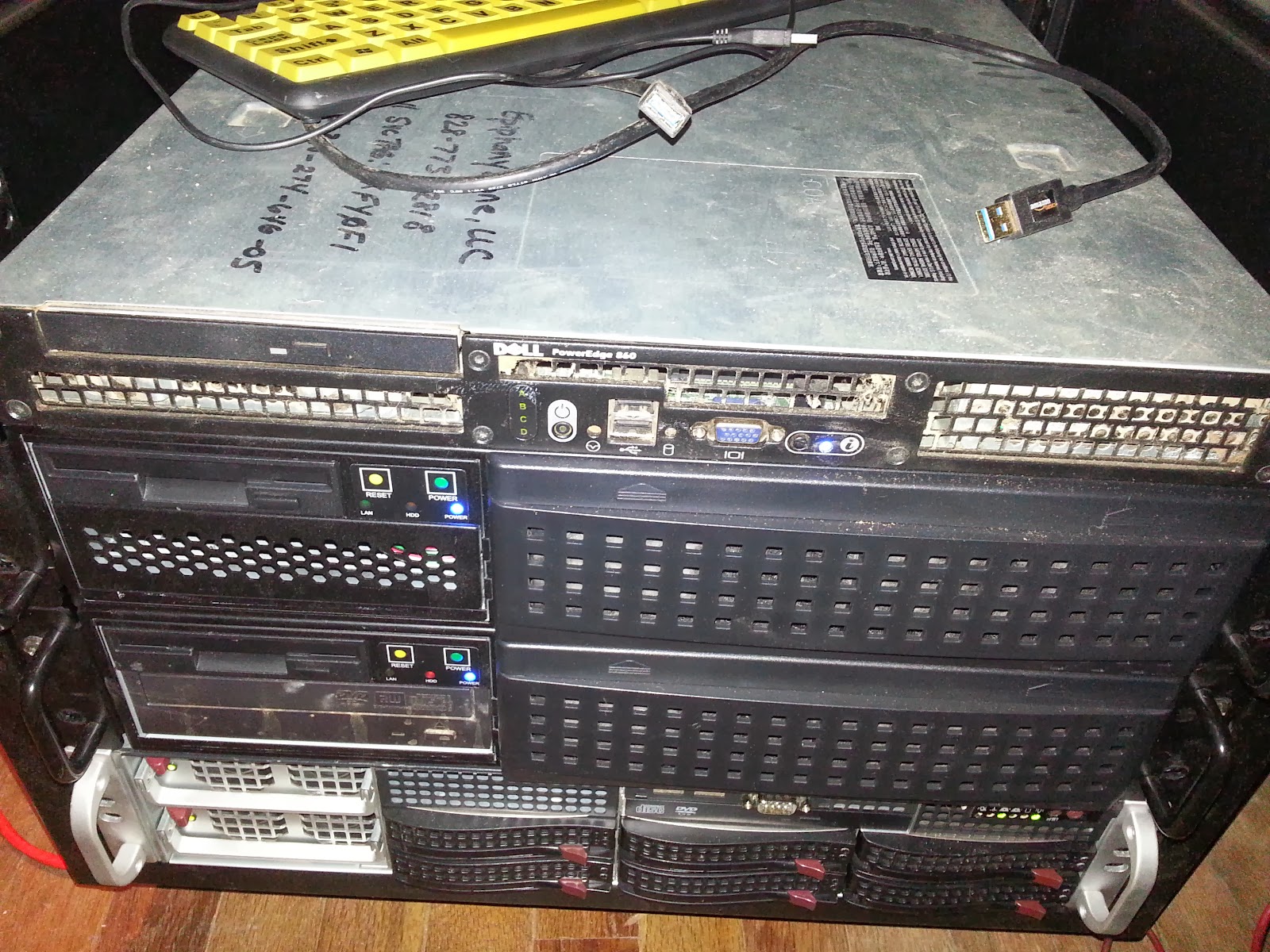 This is still a work in progress.  However this is what I've done so far.  All of this has been tested outside of this setup previously.  Now I'm just trying to clean things up, and get them organized for the long-haul.

I 'gutted' a 1U rack mount server case from an old Penguin-Computing box I've had in storage for many years, to use as a 'home' for all the RTL dongles in the project.  This will help keep things organized, and keep things from getting damaged, or messed up over time.

So far I have enough for 12 Dongles which gets me from 0-1.2Ghz with one of the dongles being used with an HF upconverter.  (Not snown in the photo's so far) but it will be the one farthest to the left in the top photo.

I'm using the mini-dongles from Nooelec, which seem to be quite good in testing so far.  As good if not better than the full-sized ones sold by the same company.

Pictured is a 1.5Amp 15v supply.  Which is way overkill for the two LNA's I'll be using.

I've ordered a +15v Meanwell Switching Power Supply that should be here in a week or so.  That will power all of the "Coolgear" powered-usb-hubs, as well as the 15v LNA's at 10amps.

Nice thing about using this 1U rack is that it fits neatly into my Rackmount rack.  Along with 4 Linux servers.  The RF Linux server will be running Ubuntu and provide desktop access.  There are also 3 other servers which will be used in a Hadoop-Cluster for data storage from the RF  server running 'rtl_power'.

More details will be forth-coming.  But for now this is what I can show you. 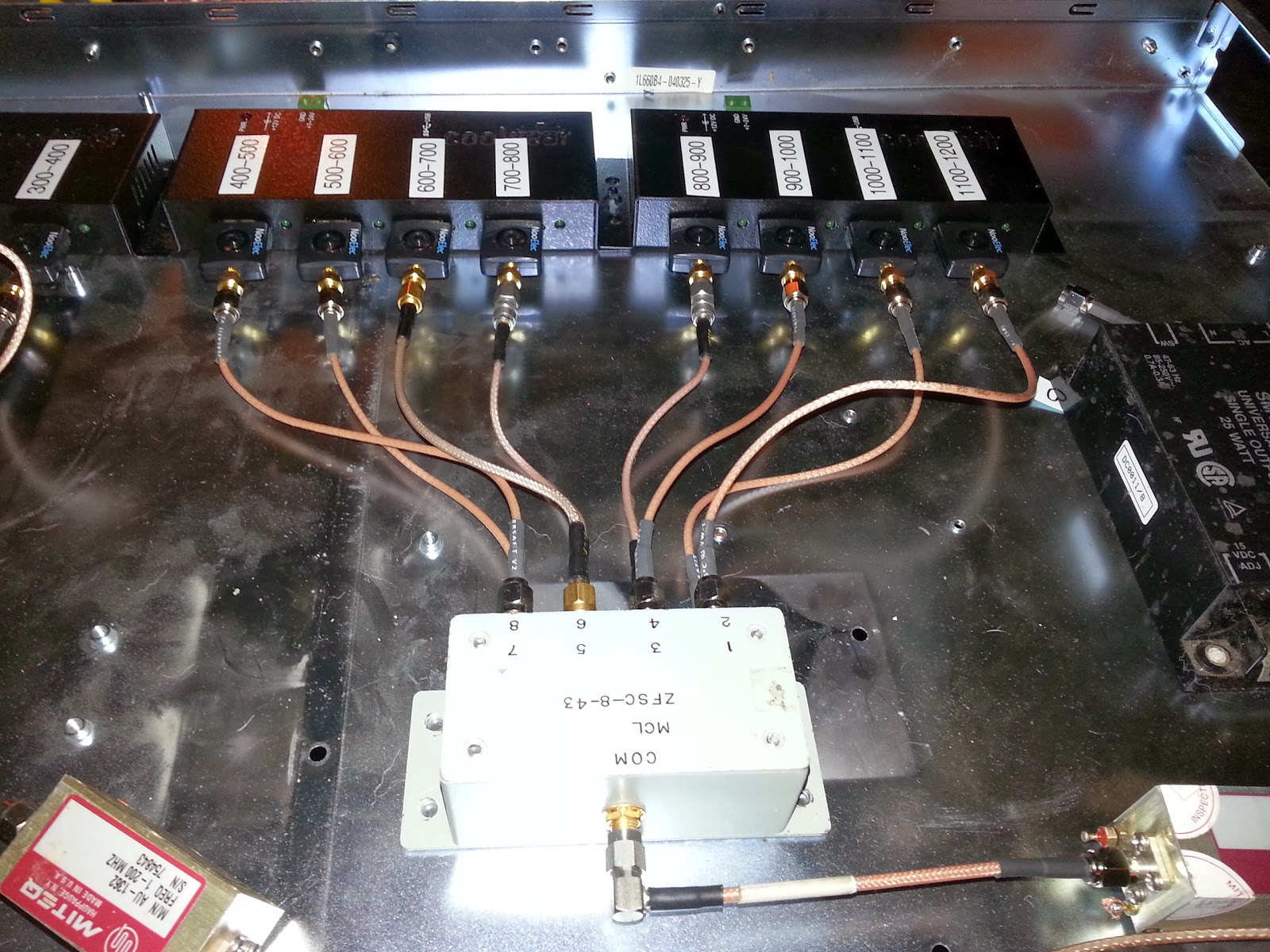 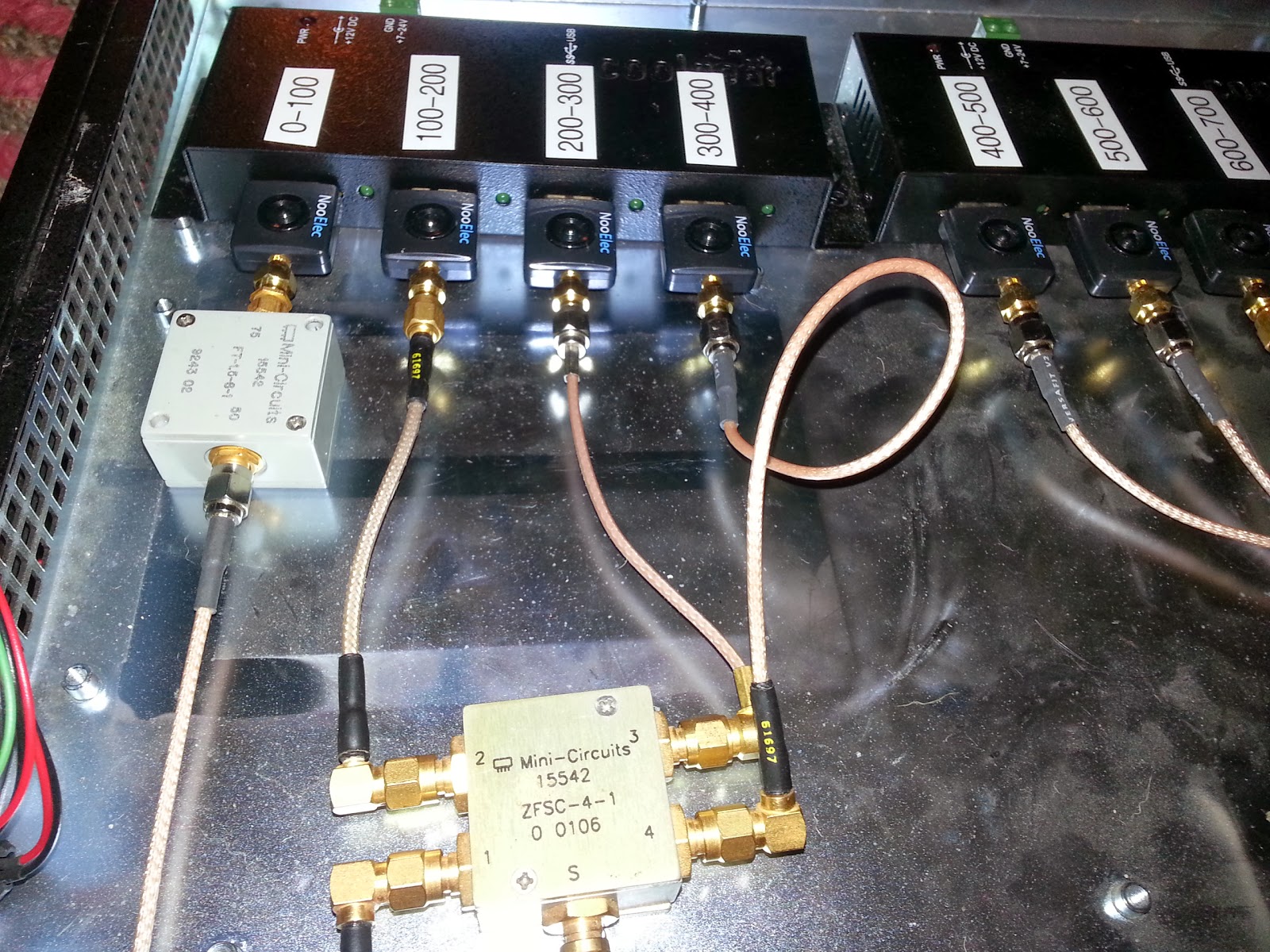 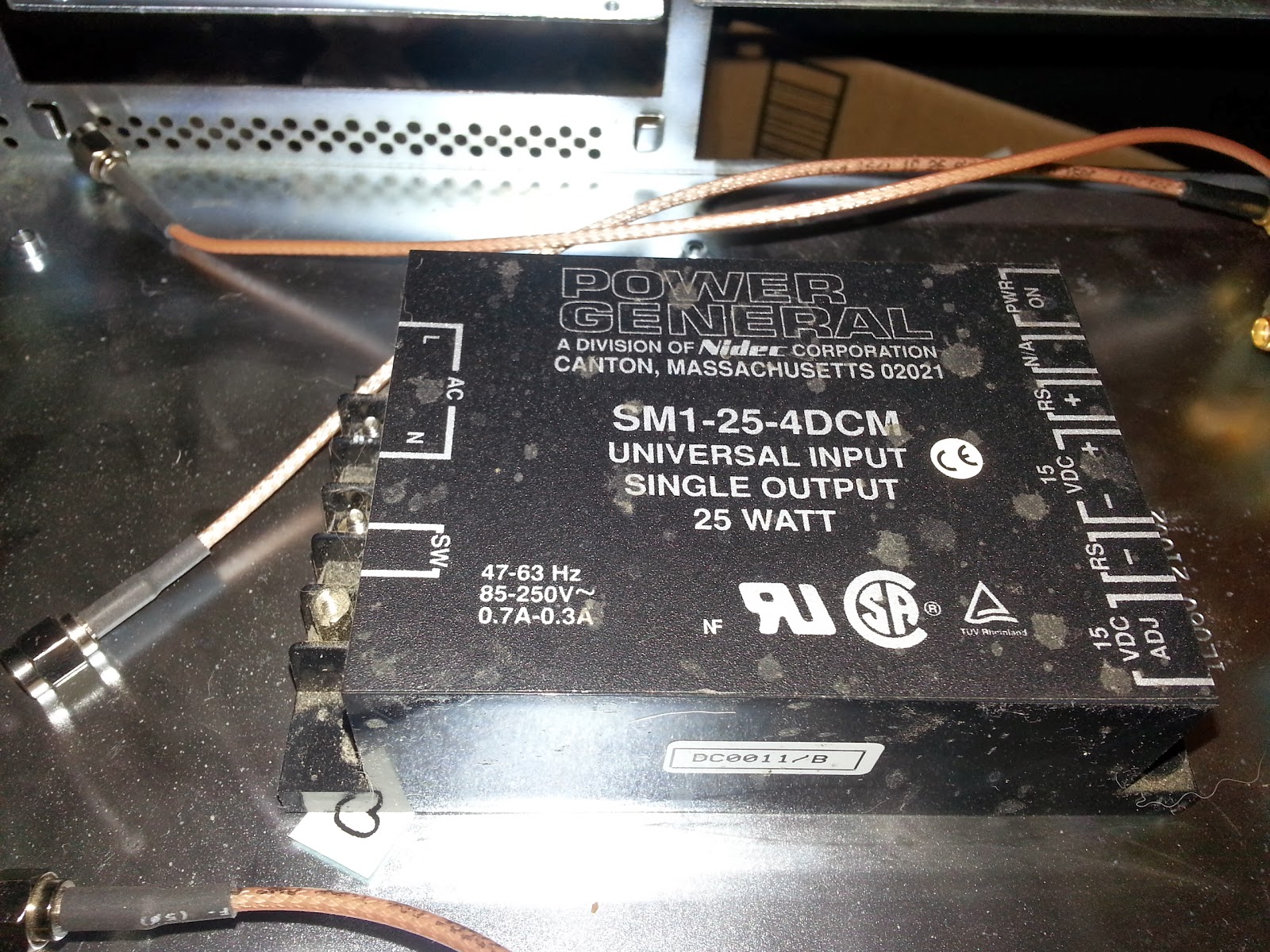 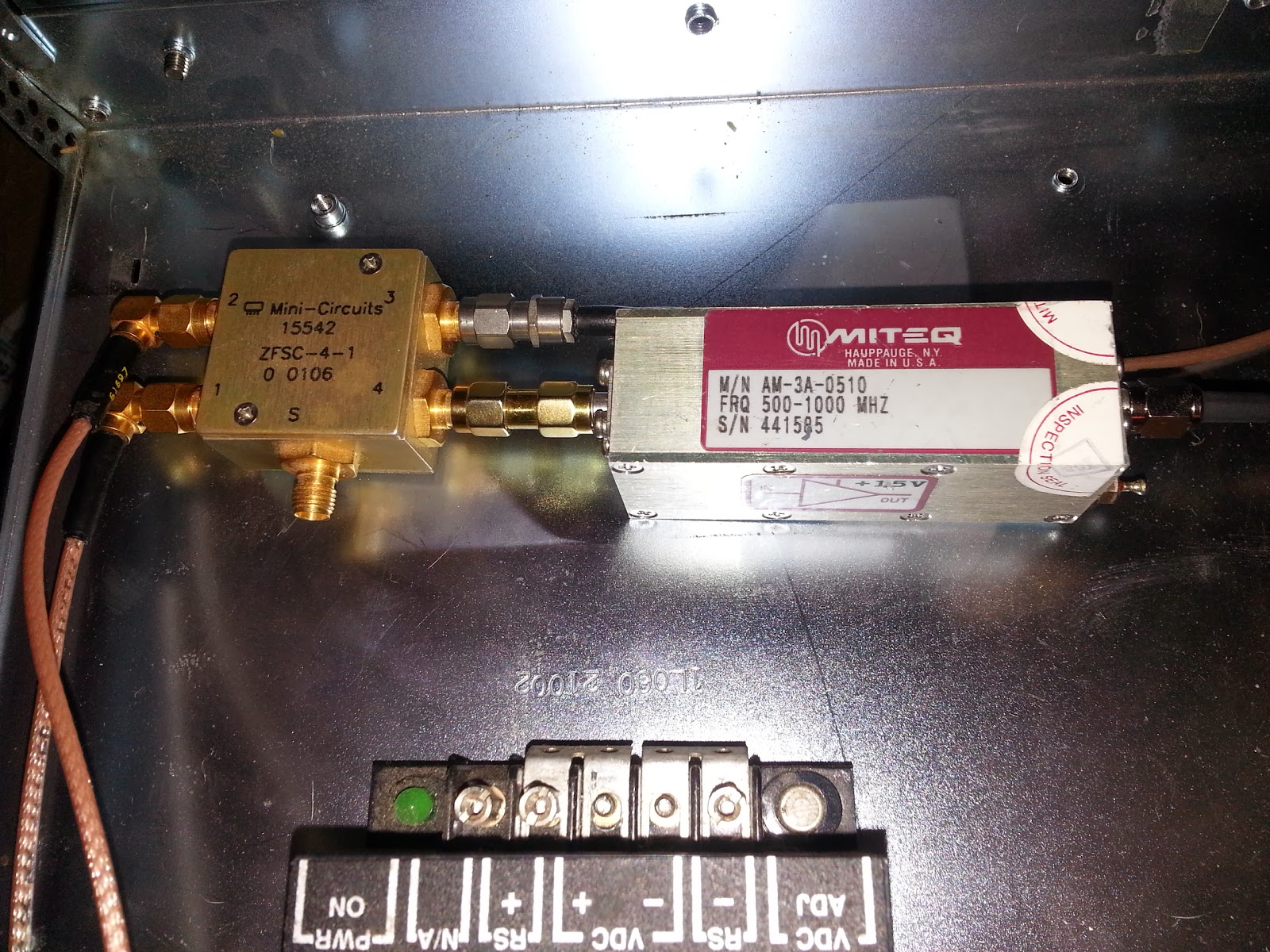 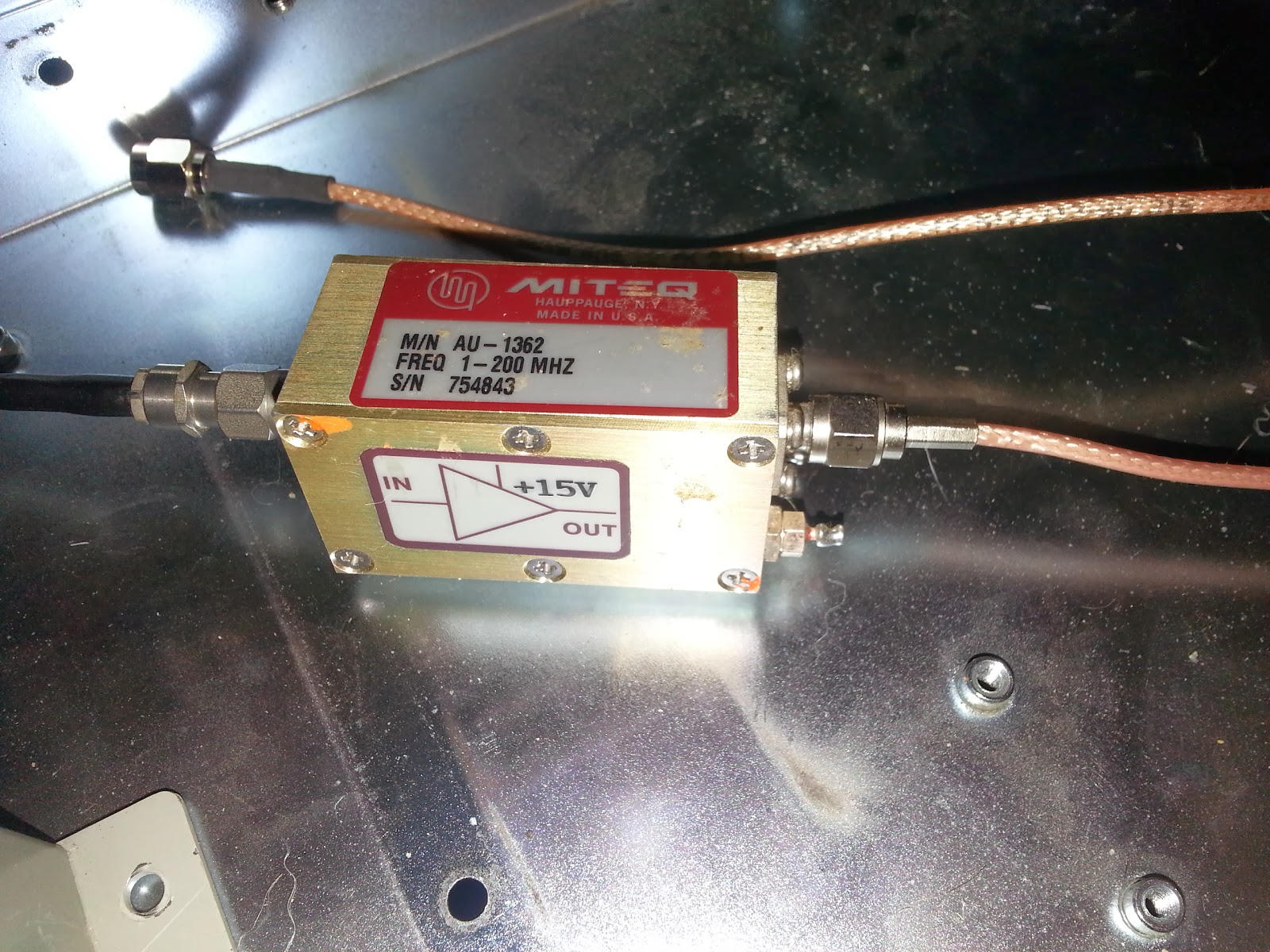 I found a place on Ebay that sells used rack mount computer servers and got one with 4 xeon CPU's.  Each CPPU has 4 cores to 16 cores total at 2.4Ghz.  The box has 24Gb Ram and can handle up to like 192Gb LOL.  It came with 3 ea. 160Gb 7200rpm drives.  Eventually I will probably replace those with 6 ea. 1Tb 7200rpm drives found some of those New on ebay for a reasonable price as well.

This box is pretty decent!  I spent $320 total on it.  Not bad really.  All things concidered.  I which is was 48Gb Ram though.

I will probably get 2 more of these boxes from the same seller.

I was give 2 more servers that are 8Gb Ram, and 4 cores each.  They're not fancy, but any little bit helps in a Cluster like "Hadoop".  So...I'll take um.

I'll snap some pix of this new box soon and post um here.

This box is going to go into the RTL SDR 0-1.7Ghz monitoring system I've previous posted here about.
Posted by Tim H at 9:37 PM No comments: 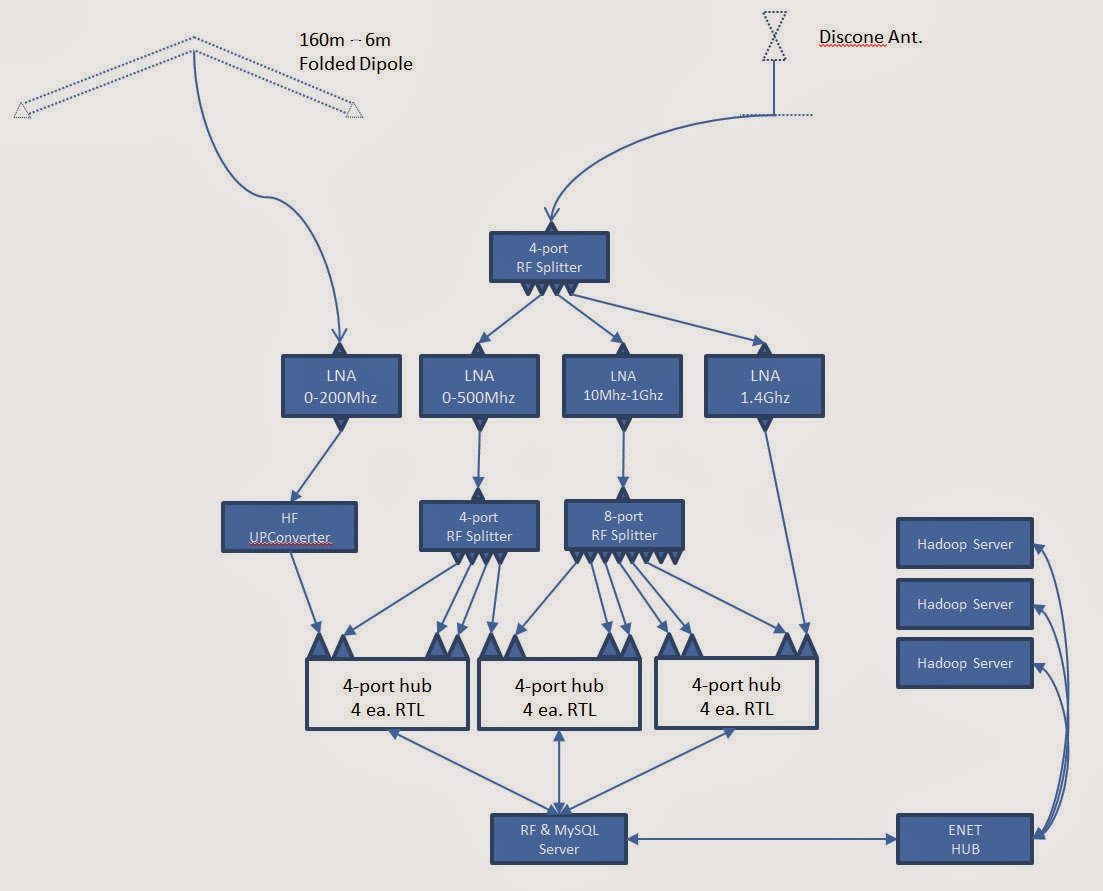 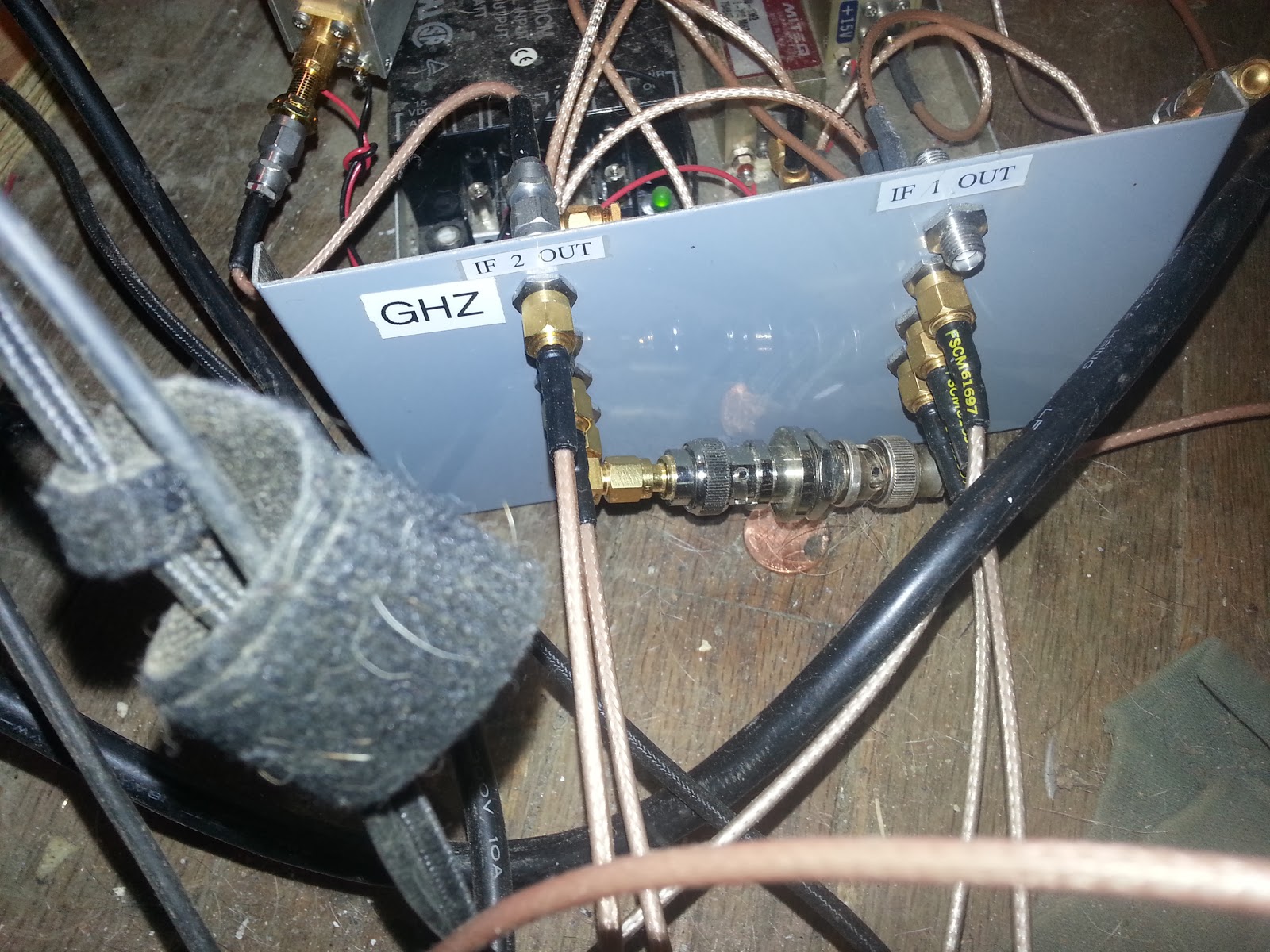