Building my own AZ/EL controller

I've used the Yocto-3D Sensor for a few years now in a Linux application (search "Driveby" on this blog for details).  Now I've got a new use for it. 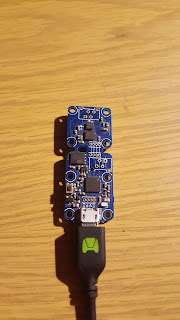 Using this Yocto-3D device (pictured above) I can know where something is pointed in Azimuth and in Elevation.  I'm starting to think about replacing my large single 6m Yagi with an EME (earth-moon-earth) array made up of 4 each 7 element LFA type antenna's.    It would look something like this: 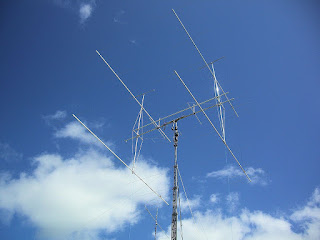 (this is G8BCG's array, it's similar to what I would build)

While I would use this the same way I've used my large 10 element single yagi antenna, it would also be able to move not only in Azimuth as it does now, but also in Elevation.  This would enable me to track the Moon and get away from some earth bound terrestrial noise problems when I'm trying to make contacts off the moon with others here on Earth.

This has been done for MANY years by hams and scientists and NASA as well as many others.  It's not that unusual.

But I got to thinking instead of paying a TON of money for someone else to provide me with software and hardware to move my antenna around that I could build a Windows (Llinux, MacOS, or smartphone) application fairly easily using software libraries that yoctopuce.com already has made available.

So today I started playing around and I installed FREE (yes really free) "Microsoft Blend for Visual Studio". Download HERE  I know it's hard to believe it's free but it is, and I downloaded and installed it today.

Within a few hours I've managed to build a simple application using C# that can take readings from the Yocto-3D sensor and display them in my application. 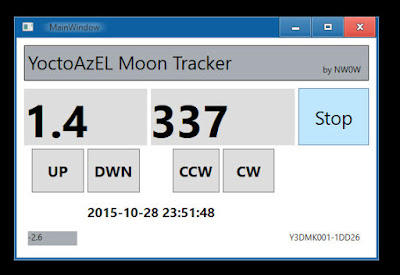 (this is my new app actually running)

A little more reading and search on yoctopuce.com's website and I found they also have USB powered, and controlled relay's capable of switch 250 volts at 5 amps.  Which is WAY overkill for what I need, but might be something I could EASILY use to power the two rotors on the tower (azimuth and elevation).  Yocto-MaxiPowerRelay

I know I could add logic into my application that could track where the moon is exactly in the sky, and then it's just a matter of adding some logic to power the USB relays that could control the rotors in order to keep my EME array pointed directly at the moon's position in the sky as it passed over.

I'll be posting more on this as things develop but for now I just wanted to share what I've been talking about online to help some folks get a feel for this.