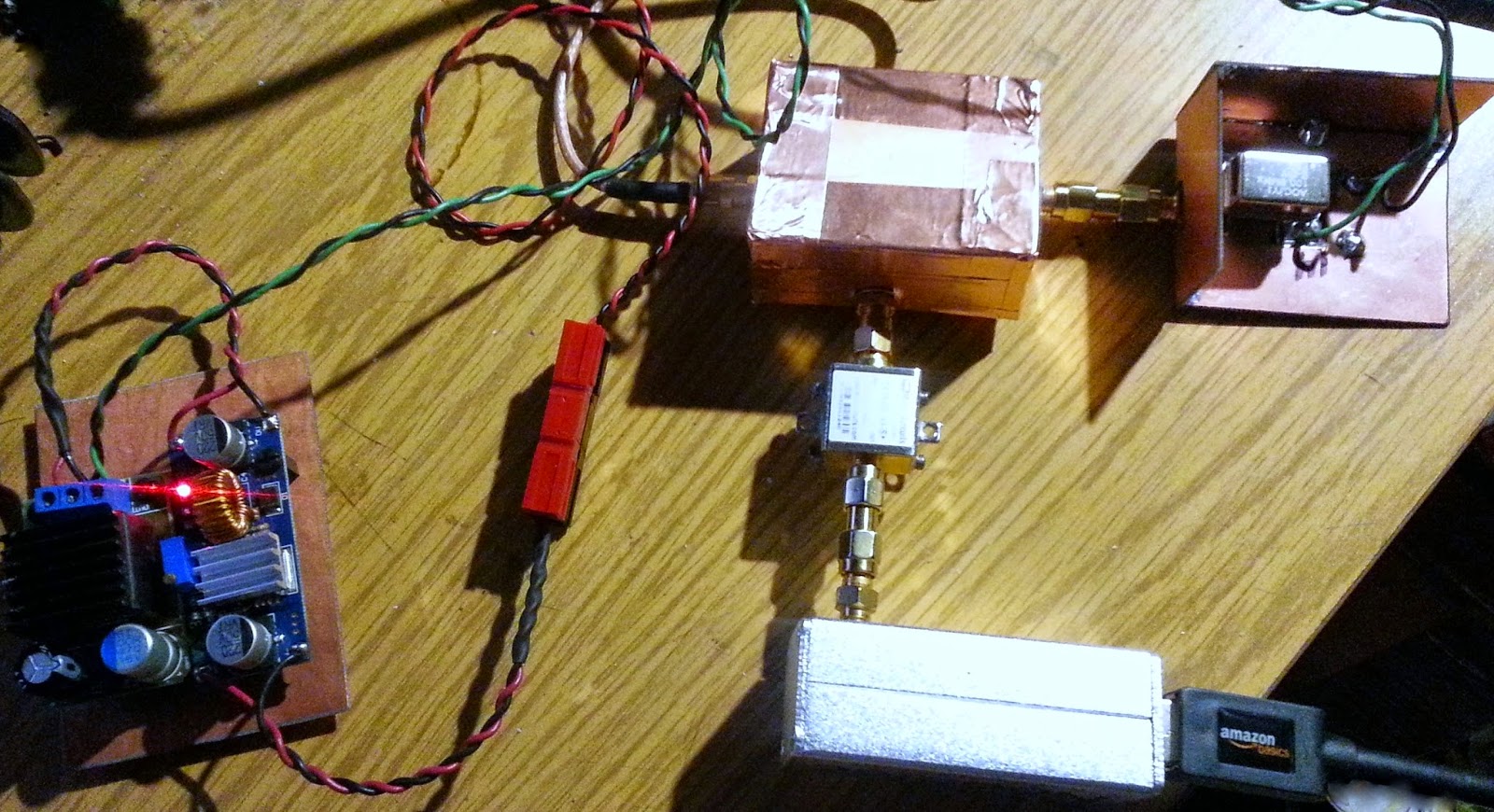 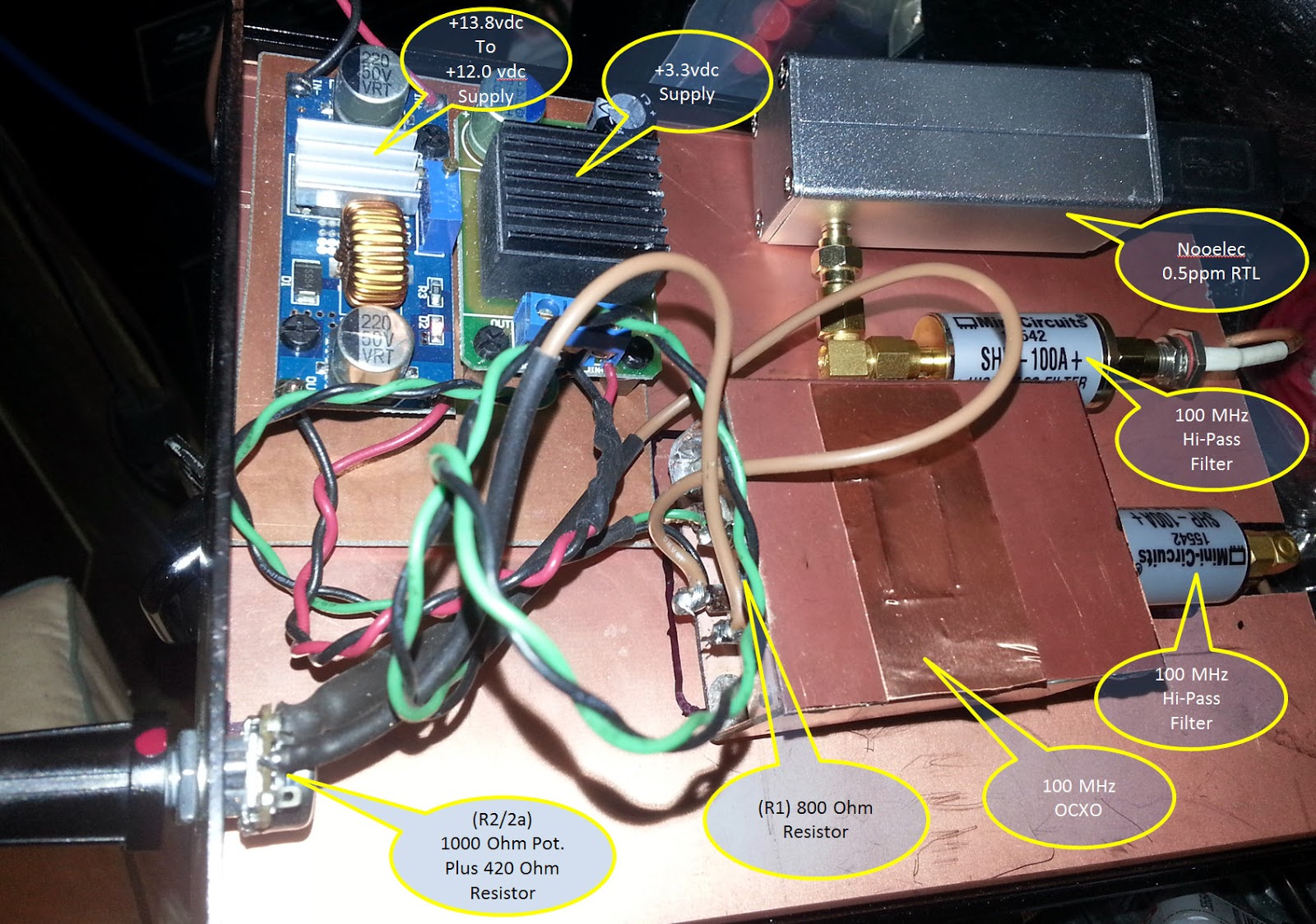 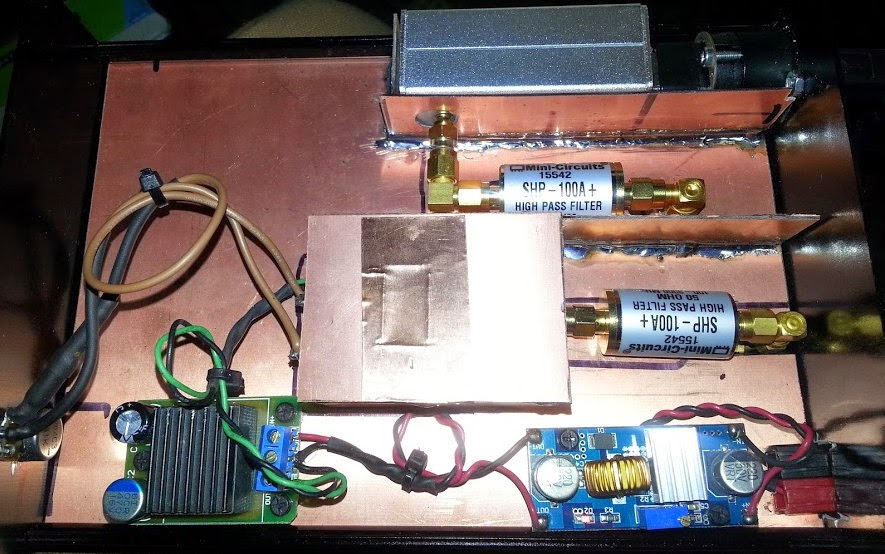 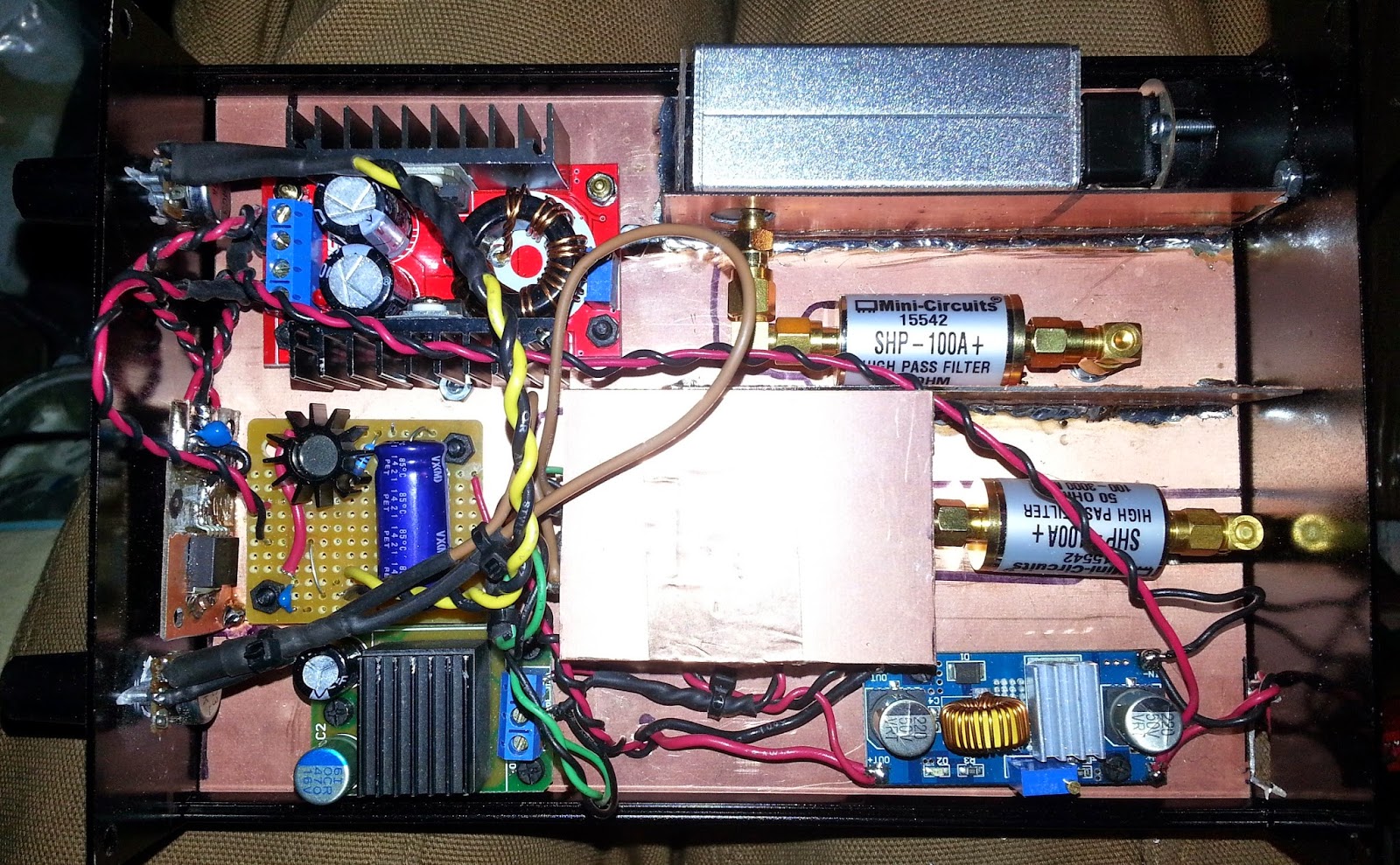 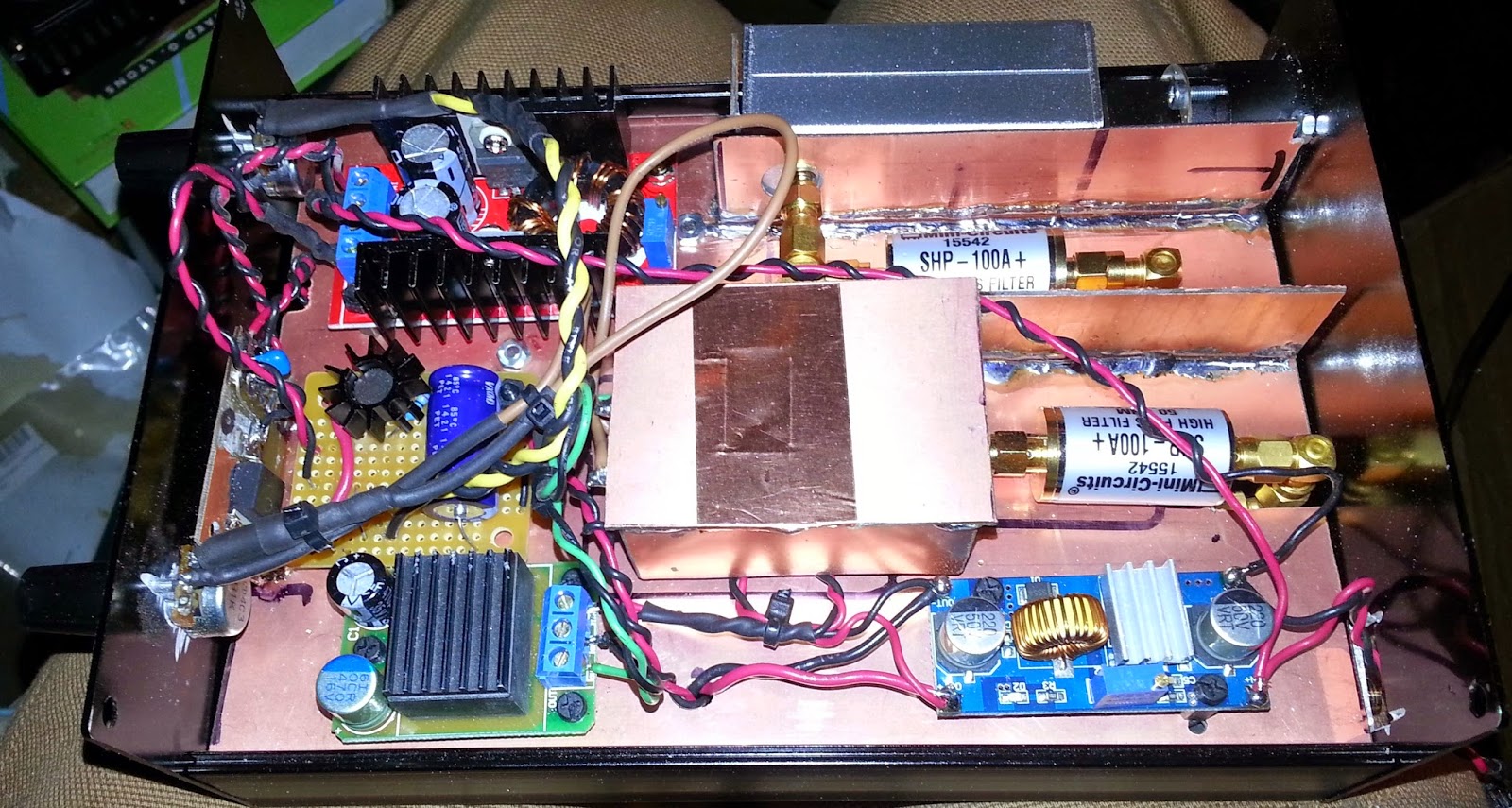 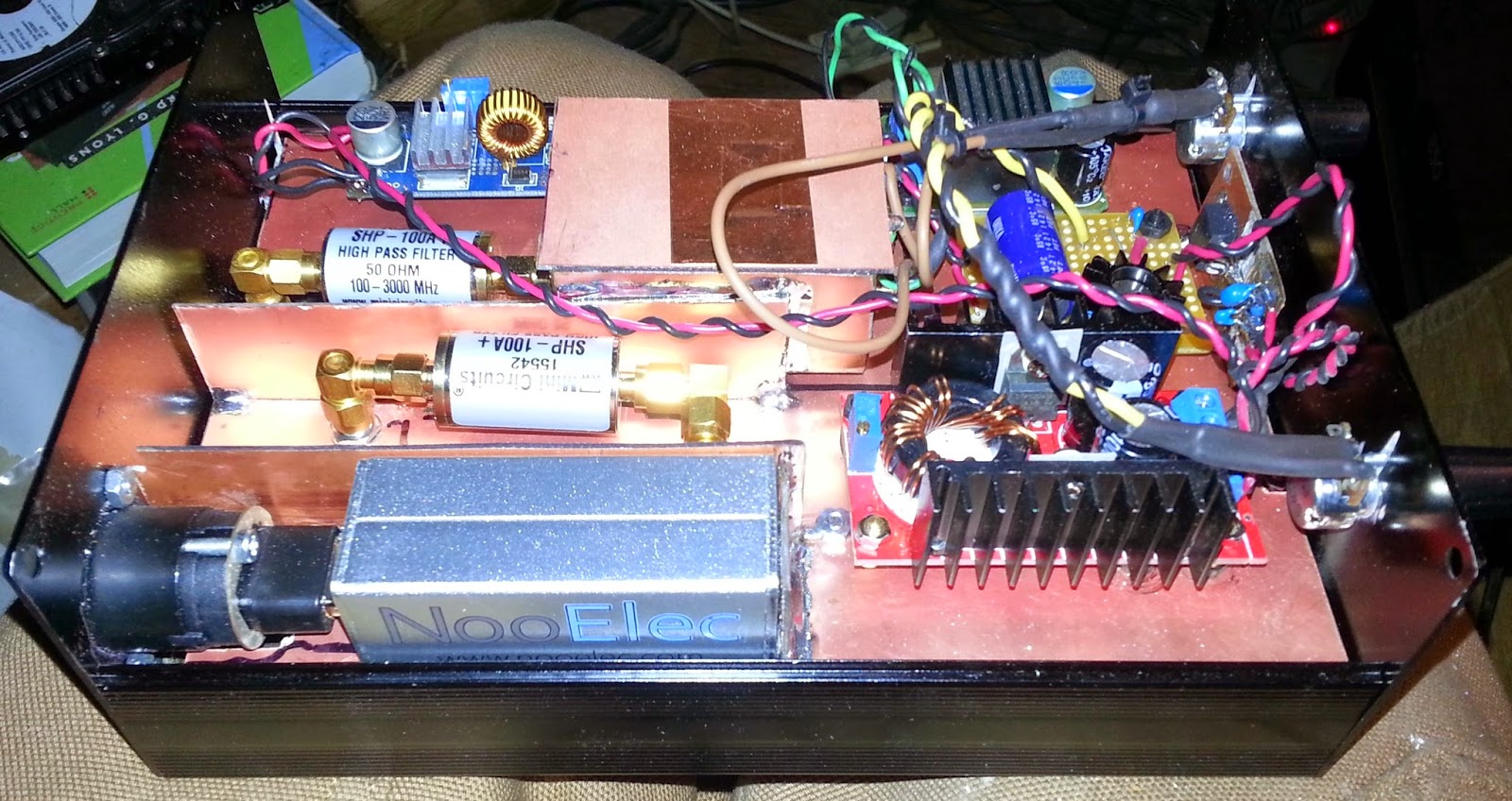 The TOP SHP-100A+ which is a HP Filter feeding the RTL Dongle is going to get replaced with a High Pass Filter I'm going to build.  My own filter will be VERY sharp and drop the 100 Mhz Carrier from the Oscillator down about 53db from where it is now, while leaving 107+ Mhz open.  My Filter will have about 5db insertion loss at 109 Mhz, but I'm also planning to add a LNA after the filter which will allow me to overcome that loss somewhat.

The Empty space top LEFT will contain a +20vdc DC-DC boost converter as well as a LM117 voltage variable regulator +17vdc to 1.2vdc to power a 41db voltage variable Attenuator and a pot will be added with a second knob to control it.

I'm also planning to add a PTT actuated RF Relay to switch out the RF input when my primary radio (and FTDX-5000 transmits) as I don't like the output of my Transmit via the 9Mhz IF output showing up in my Pan Adapter output. 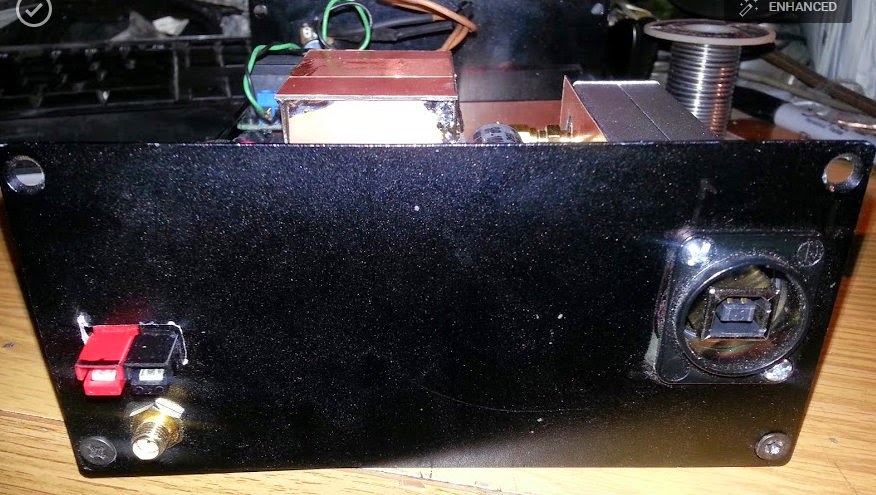 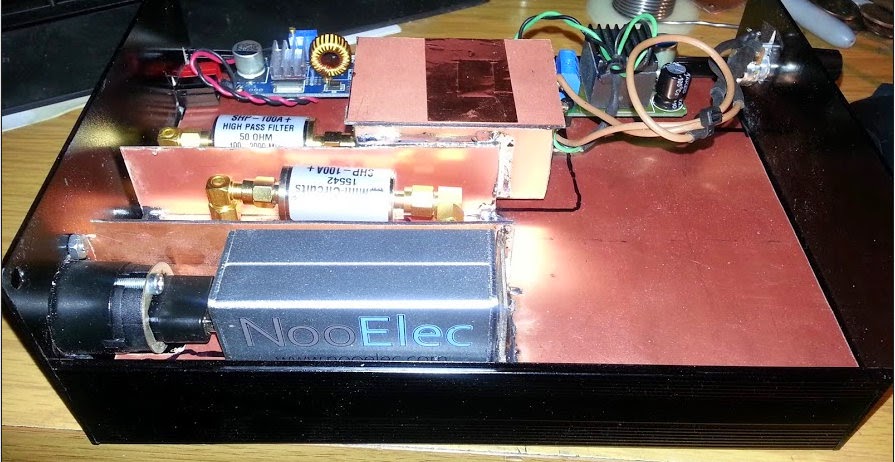 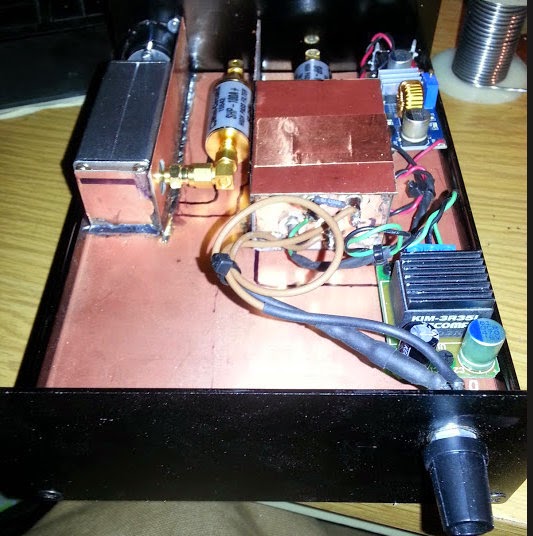 The only dismal be at this point is that the Nooelec 0.5ppm RTL Dongle doesn't really seem to be living up to what I'd expected.  From a cold start it takes 15-30 minutes to (mostly) stop drifting.  But I suppose that's what you get with a TCXO (I don't really know).  I do know at cold start up it drifts in excess of 700 Khz, before it's really starts to settle down.

This is NOT the fault of the FTDX-5000 or the featured 100 Mhz upconverter I've built.  The upconverter after about 45 seconds basically doesn't drift.  It's pretty amazing and well worth the $74.00 I paid for it (for my needs, it's worth it anyway).

I've started to work on building my own HF upconverter that will use an OCXO that is stable to 200ppb (that's 200 parts per BILLION!), not something typical like the 25ppm, 5ppm's that are commonly available for a very reasonable cost. 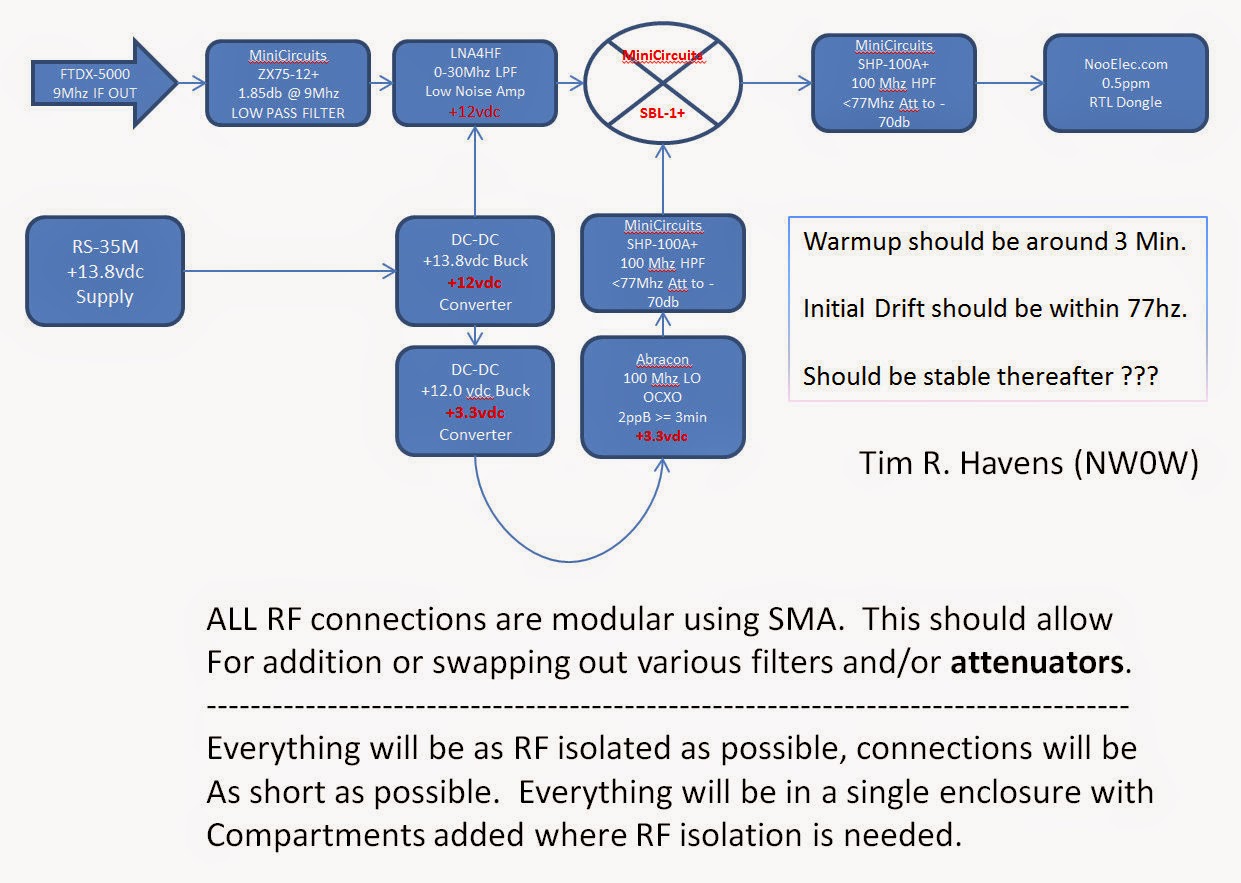 The idea here is that I am primarily a CW operator.  My current Pan Adapter setup runs off the 9 Mhz IF output from my Yaesu FTDX-5000.  This then routes through a LNA, Bandpass Filter, and into an HF Upconverter where it comes out at 134 Mhz...this is where the RTL SDR Dongle operates via HDSDR.

I had a RTL SDR Dongle which was stable to about 60ppm, and the HF Upconverter was stable to about 25ppm for many years.  This meant that there was almost always some dicking around involved with keeping the Pan Adapter Software "HDSDR" lined up with the FTDX-5000's stable IF output.  Thing could drift at least for several hours slowly up the band until it warmed up and as long as the Temperatures in the room didn't vary too much things were 'close enough' to be useful.

NOW I have a 0.5ppm RTL SDR Dongle.  This thing is quite accurate, however my old HF Upconverter was still only accurate to 25ppm.  So I swapped out it's 125 Mhz LO with a TCXO that was stable to 5ppm (more or less, mostly LESS) the net result was that after about 2.5 hours the total drift was around 1.1Khz.  This is still REALLY CRAPPY for CW (Morse Code) which is very narrow bandwidth.

While Talking to Nooelec.com recently we swapped emails back and forth for quite some time.  I found better TCXO's, and then came across the idea of using an OCXO.

The benefit of an OCXO is that they warm up VERY quickly compared to other LO's and once warmed up remain VERY stable.  Trouble is I could only find an OCXO that is in the 100 Mhz LO range which could get me to the 200ppB level at a reasonable price and delivery time.  So that's what I'm going with for this little mini project.  The downside to using a 100 Mhz LO is that the output of the 9 Mhz IF from the FTDX-5000 will be one 109 Mhz.  Pretty close to the FM Broadcast band.  In the past I've not had a lot of trouble with this sort of thing, mostly because I used a FM Broadcast Band STOP Filter in line with everything.

So I can't really use the Band STOP Filter anymore.  However, this may not really be a problem.  The LNA4HF has a LO Pass filter, which should keep anything > 30 Mhz out of the primary input.  So that will help.  I'll keep all the coax lines very short (just a few inches) and use female-female type connectors to link all the components together.  I'll also keep everything shielded, and grounded as best I can.  I think this will work out ok.

I'm planning to use an LNA4HF which includes a LOW-PASS filter in it already.  This then will route to a Mini-Circuits SBL-1+ Mixer.  Also I'll be using a 100 Mhz LO (200ppb) going into the SBL-1+ Mixer.  Output of that will route into the RTL SDR Dongle from Nooelec.

This "SHOULD" result in a MUCH more stable upconverted signal being fed into the RTL SDR Dongle.  That's the plan at this point anyway...this is sort of a side-project, but I wanted to share my thoughts on attempting to do this.

This is a review of a similar device and should help if you don't quite understand the problem I've been describing.

I'll post more details on the various bit's and pieces I use and pix of the finished project when I'm done.

Also a Note: Nooelec.com says they're working on something new that may resolve all of this within 10-12 weeks, and something else in the range of 3-6 months.  They wouldn't indicate what exactly they were talking about.  So that's why I'm moving forward with this little end-of-winter mini-project.

More details and where to get the various components I use as I get them.  Most of this I already know, but some may change.  So...stay tuned. (no pun intended! HAR!)

Here is a list of what I'm planning to use and where I got them:

Here is an example of how simple this really is:

While this is super simple to setup as seen in his video, I expect that I'll have some technical issues getting this to work as well as my "Ham It Up v1.2", at first.  But that's OK, because it should be way more stable than the Ham It Up since it's using an OCXO.  (I sure hope).

Anyway, this is going to be a learning experience for me.  I've never done this before, at least not like this.  I'll post mod's to this plan right here on this page as updates.

One thing I'd like to do is in front of the LNA4HF would be to place a 9 Mhz Band Pass Filter that is 2.5 Mhz wide.  I don't really know how wide the 9Mhz IF is coming out of the FTDX-5000 but it seems to be at least THAT wide.  THE LNA4HF's LO Pass Filter should keep a lot of crap out of things to start with.  This idea is just to have more control of what gets in is all.

I MAY have to attenuate the OCXO output a bit, I've heard these things can be really strong, and if so I may have to use some in line attenators at least I may have to experiment around with that some.

I added some more filters after reading THIS and THIS to my design.

WARNING: my resulting design is meant to be modular enough to I can play around with OFF THE SHELF things as I wish.  This isn't a FROM SCRAP project and therefore it's a LOT more pricey than it would really need to be.  So be advised I'm already aware that I'm going at this from an expensive direction, and that there are cheaper ways to get/build filters etc.  This is intentional for what I'm attempting to do.

NOTE ALSO: I'm aware that it's possible to get and use OTHER LO frequencies for this upconverter and that using a 100 Mhz LO can be problematic.  (so you don't have remind me :-)

Mixers I will test with:

The ZX05-1L+ from MiniCircuits looks like THIS.  (but costs 2/3 more @ around $37.00) It's advantages include already mounted SMA connectors all around.  Specs aren't the same as the SBL-1+ but they are similar enough that I may try one of these in the future. UPDATE I actually have ordered this, and one other similar.  I believe this mixer is +3db and the other one I ordered similarly configured is a +7db.

The ZX90-2-13+ from MiniCircuits looks like THIS. Depending on how strong the OCXO output really ends up being it may be possible to use this device (with it's 11db loss) to 2x the 100 Mhz output of the OCXO up to 200Mhz.  The Mixers above should handle that frequency range.   This would make the output in my setup from all of this to be at 209Mhz which would avoid the issue of the FM Broadcast band on the output to the RTL Dongle.  This item is simple SMA type connectors (plug and play) so would be easy to test and the price is reasonable around $35.00.  (I haven't ordered this, but keeping the idea in my mind).  The reason this might be useful is if the RTL Dongle needs to be placed far away from the upconverter, the output of the upconverter would be 100 Mhz higher than the FM Broadcast band....and EASILY filtered out with a band stop filter if needed.  I honestly don't think I'd need to go this route, but it's something to consider, for many reasons.  Lets say you wanted to use a different OCXO frequency because it was cheaper or something, this might help you get he output into a range that's more to your liking.  It has a fair amount of loss so the LO would really need to have some decent output (I think) but anyway...I just didn't wanna loose this detail in case I want to play with it later.

Everything for this has been ordered, and now I wait.  I'll post updates and pictures as things progress right on this post page. 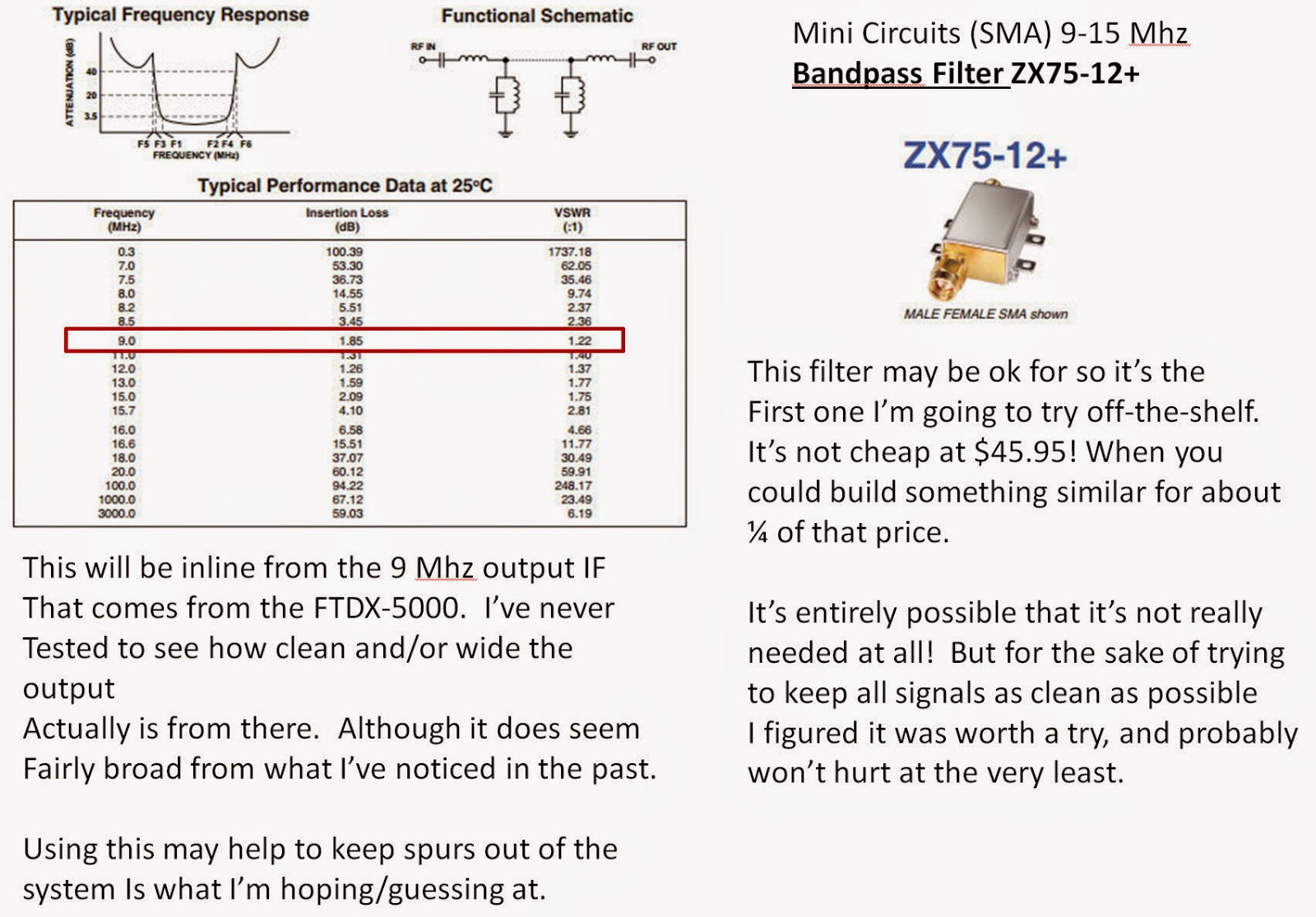 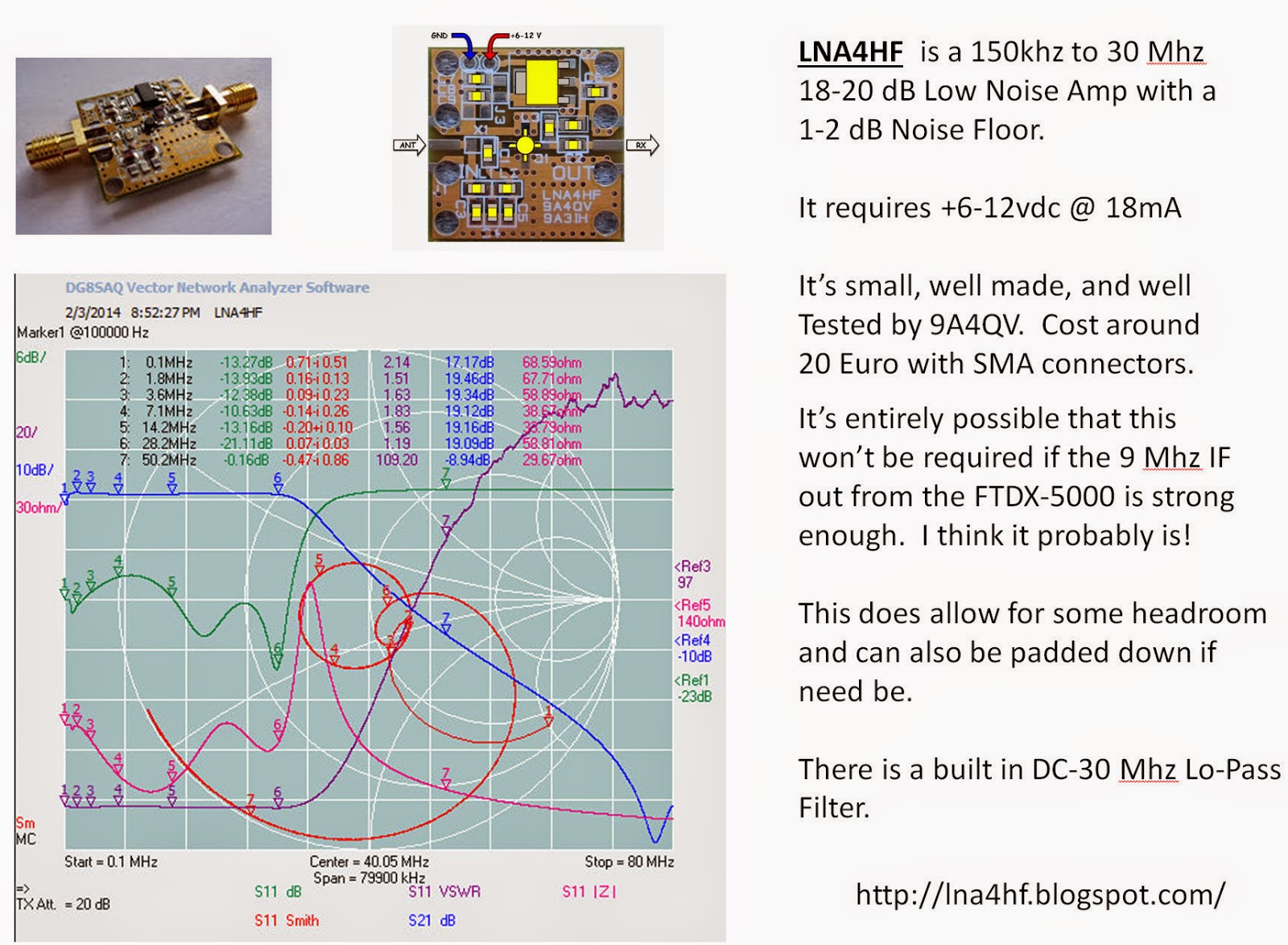 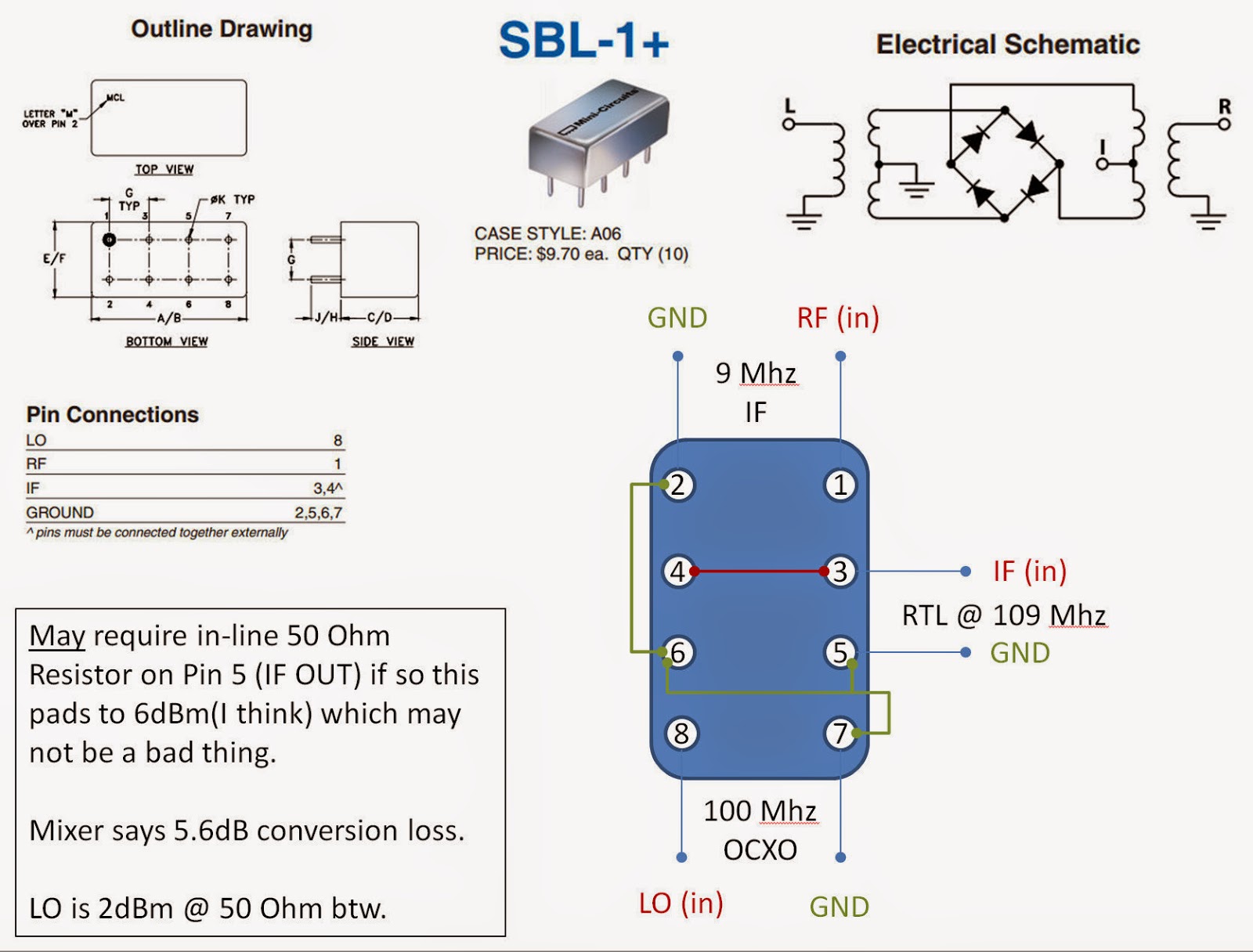 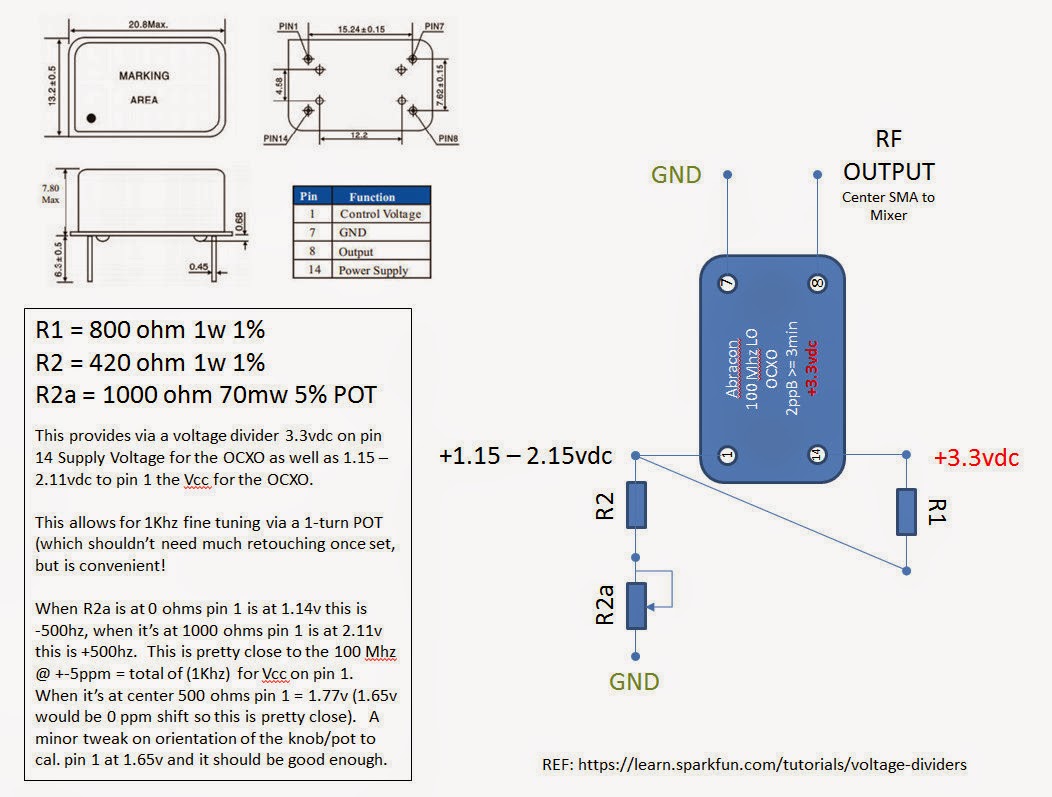 [MORE DETAIL ON THE BUILD]
(OCXO with Controllable Voltage Divider to Pin 1)
(subject to change, just a starting point concept) 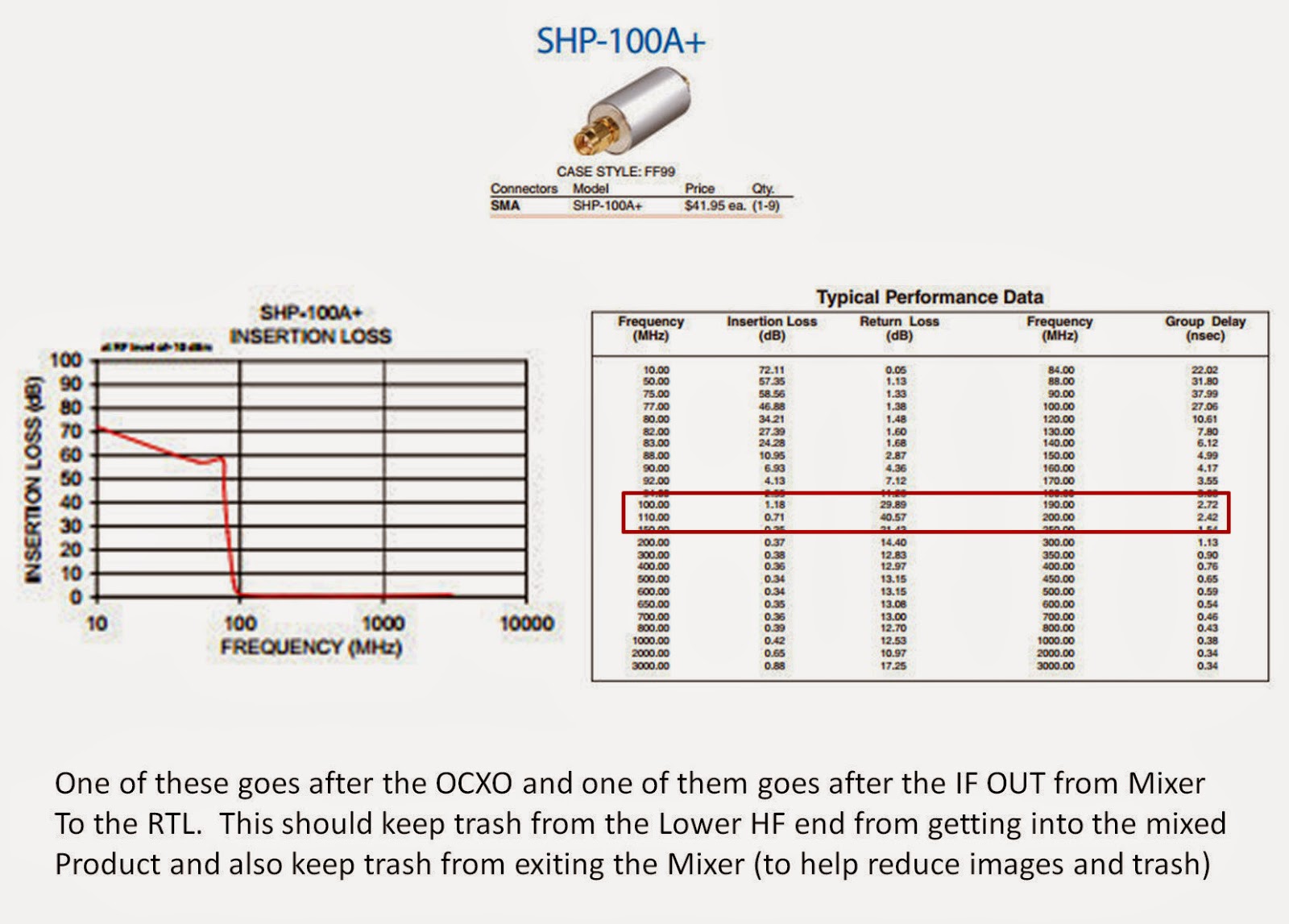 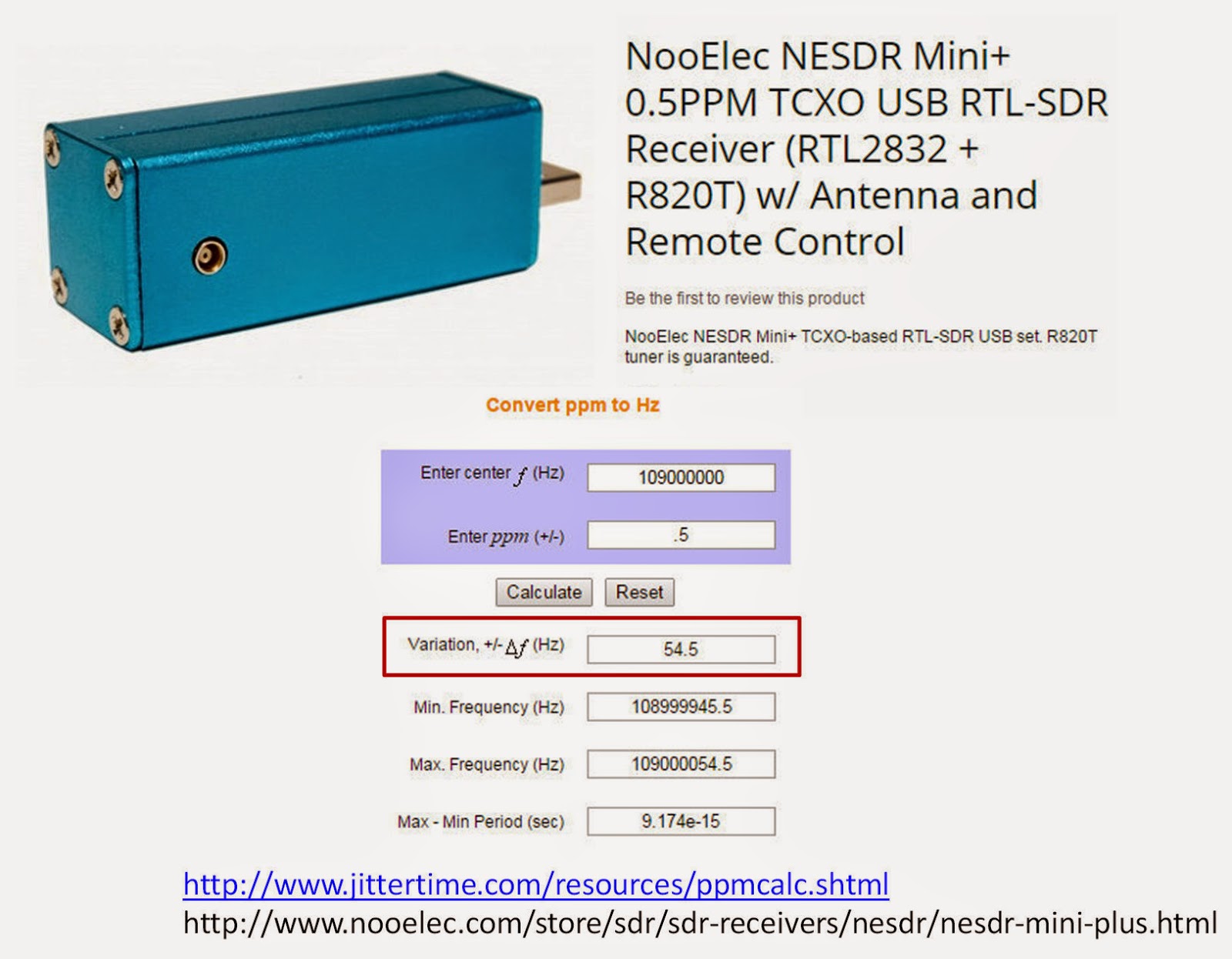 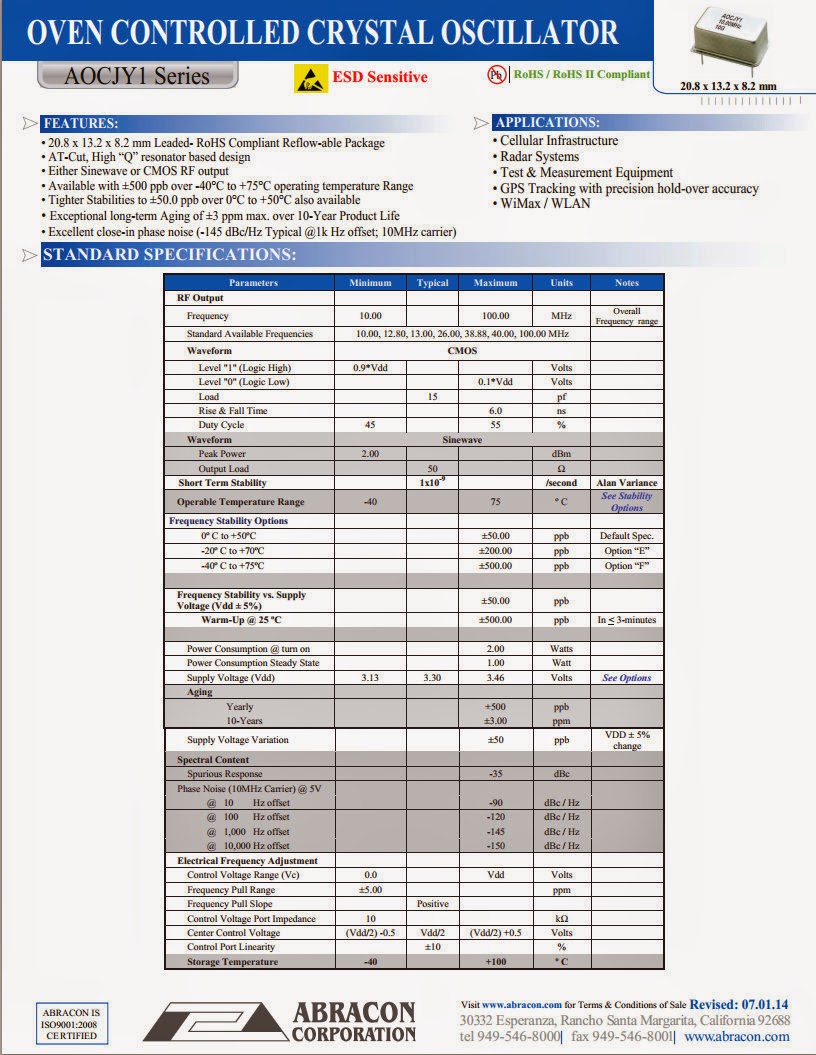 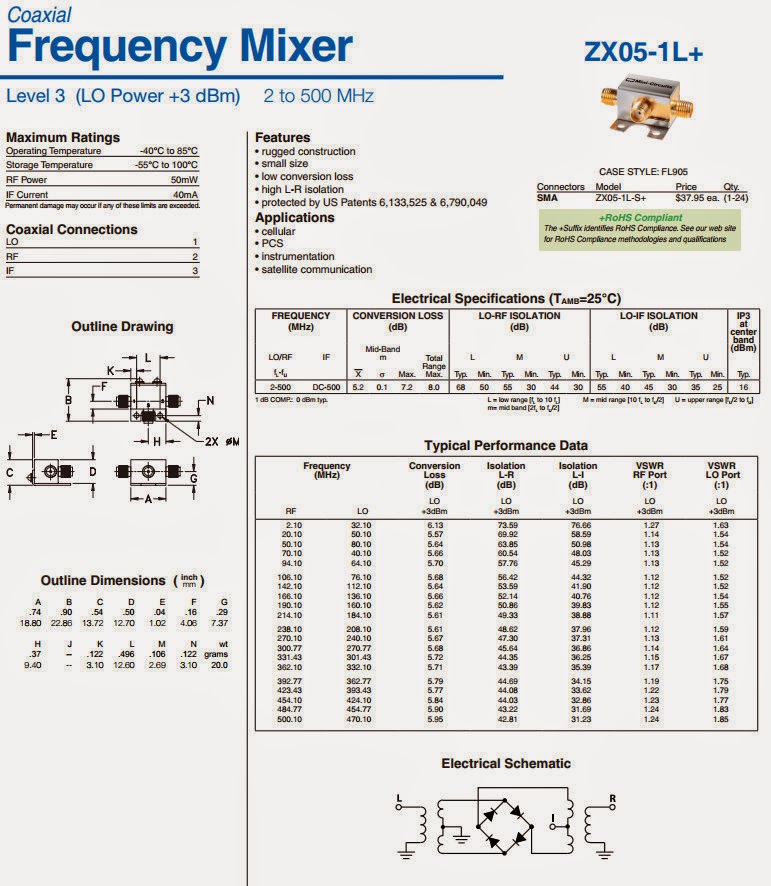 After further reviewing the spec sheet for the OCXO I have it appears to me that the +3dbm mixer is probably the best choice of the bunch.  While I don't see a lot of difference in the Spectrum being displayed I suspect this +3dbm is better matched to the OCXO output. (I'm kind of guessing based on a very basic understand). 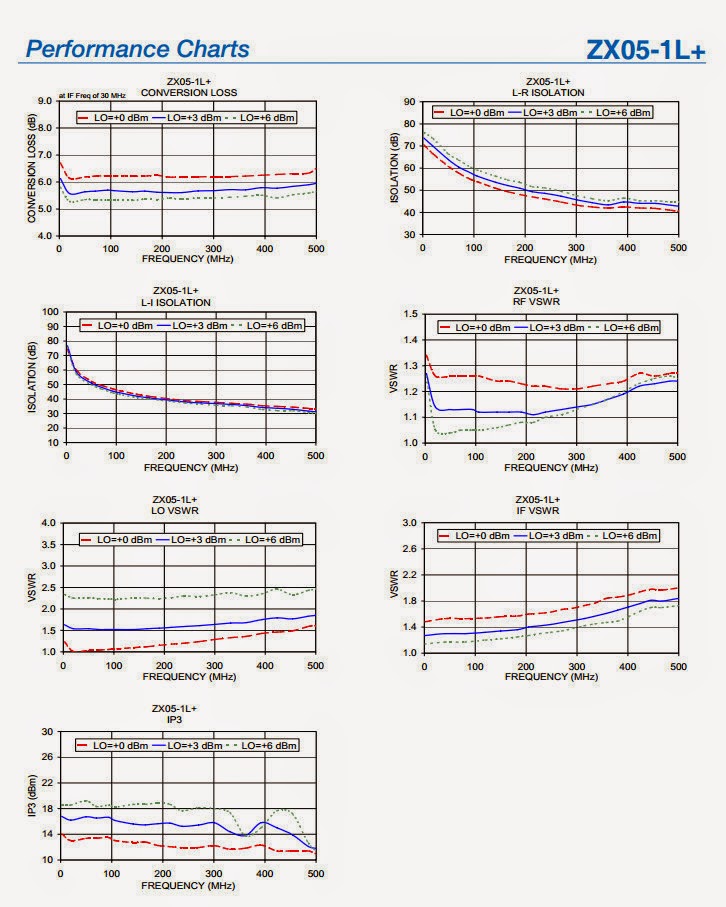