A few weeks back (maybe a month ago - not sure) a friend of mine asked me how the RFI/EMI was with these Switch Mode power supplies I'm using.  At the time based on my tests at that time I hadn't noticed any RFI on my EME radio.

After a LOT of research and poking around (literally) inside and outside the SSPA Power supply I've been building I finally decide to test for RFI using one of my spare power supplies that go inside the SSPA supply.  I had already prepped it to go in the SSPA supply in case I ever needed to replace a failed one, so it was just like the others in the project.

I decided to do some tests (this is pretty much all I could do to try to track this down at this point without an oscilloscope handy).


This supply I would test had one of the protection diodes across the positive and negative terminals that I've previous written about.  One of the first things I did was test this spare supply with and without that diode attached.  It turned out that the major source of RFI I was noticing was directly related to this diode.  With it on, the band was full of noise, and off it would almost disappear.


So my next step was to remove all of those diodes.  Once that was done I went back to tracking down the RFI that was remaining.  At this point I set the spare supply aside and went back to working on the completed SSPA Supply with 8 of them inside it.

I installed 21 material 43 Fair Rite snap on ferrite beads on all the DC wires, as well as the AC wires inside the case.  This made a significant difference.  It got my noticable noise on the EME radio down to being only about +1dB when I turned the power supply on. 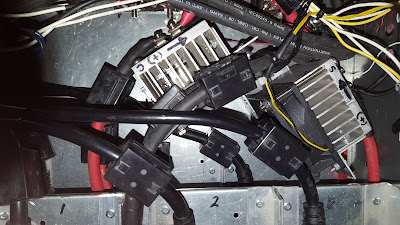 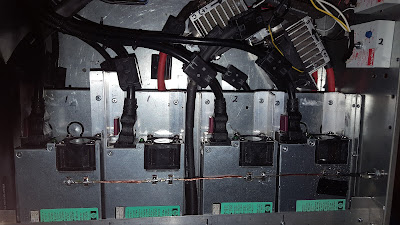 The 12vdc source I use for control of various circuits inside the SSPA supply was running on 120vac on one side of the 240vac AFTER the EMI inlet filter.  I changed this over to run on 240v so that it would draw evenly on both sides of the 240vac.  I read that you shouldn't run something on one side of the 240vac if you are using an EMI filter because it sets it off-balance for lack of a seriously in-depth description.  I also replaced a 12 inch long Earth ground strap to this supply with about a 2 inch strap that runs to the SSPA supply case (which is Earth Grounded).  I added some capacitors across the terminals of the 200 amp 60vdc Final output 'contactor', because I was seeing a spike in noise when this was energized. 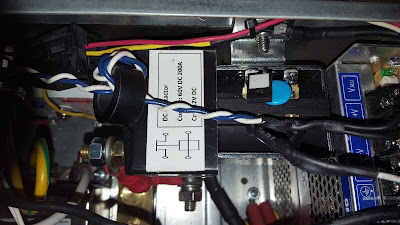 These changes got my RFI down to <= 0.5dB (measurable, and repeatable) on the EME radio. 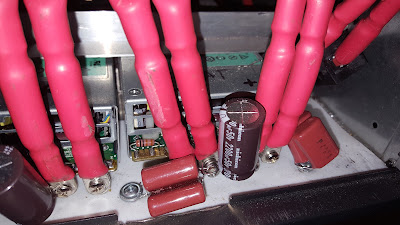 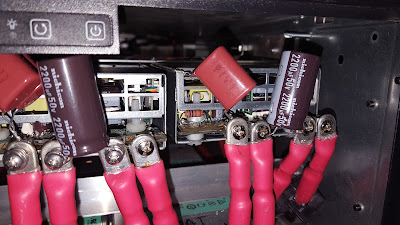 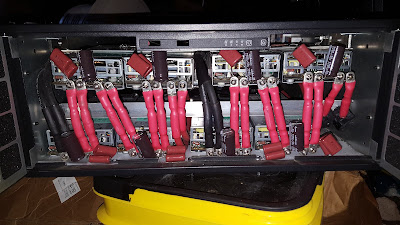 After this I no longer can detect any RFI on the EME radio when the SSPA Supply is turned ON.

There IS however, RFI *INSIDE* the SSPA Supply case. 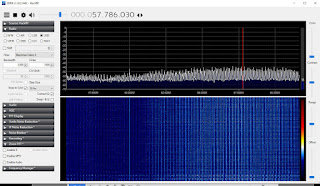 But it's no longer radiating out of the case.  So there may be more work to do, but at this point I'm calling it resolved. 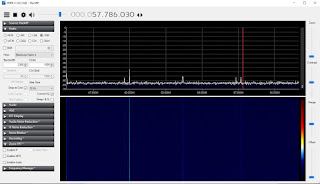 
So I *WAS* seeing S5-6 noise when this all started.  Now there's NOTHING on the S-meter when I turn on the SSPA Supply.  And WSJT 10 'measure' function can't detect any changes in the noise floor when I power it on/off.  The HackRF can still spot RFI inside the case, but just outside the case it no longer does.  And my ears don't detect it at all.

PS I would like to re-install the protection diodes again at some point and I may attempt that.  I've since discovered that these diodes are probably ringing and I probably require some Fast "SOFT" recovery diodes instead.  I've also discovered that some folks add caps around the diodes on the same terminals.  It might be that the caps I have on mine noise could handle the noise from the diodes.  But for now I'm gonna leave it all alone until I can do another big load test.  (which may happen this weekend).