I get asked (a lot) how my system is setup.  Number ONE it's probably overly complicated, and under thought out.   But since people keep asking I'm trying to document it.

The SDR (Software Defined Radio) which I use is an SDRPlay "RSP2Pro" (no longer available I don't think).  The latest version that's similar is the "RSPdx" (there are several seller's but here is one I use)

My first priority is to keep my SDR's SAFE from high RF signals.  YES there is a fair amount of over-kill here.  NO you probably don't need to do the same thing.  It's just how I did mine and it's worked so well for several years now that I haven't had a need to change anything.

The only reason I'm using the FTDX-5000 at this point is because it's what I own.  I've had it now for probably about 10 years.  It's 'just a transmitter' for the most part anymore.  I don't really use the RX chain other than to take what comes from it's internal T/R relay to it's "RX IN/OUT" ports.  That, and using it to PTT things.

The images below ARE clickable for larger copies. 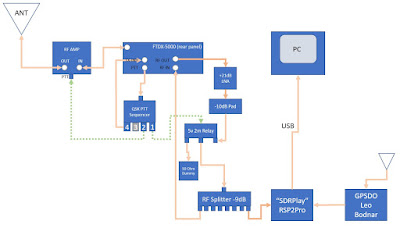 Here's another previous attempt at drawing this
This is where the SDR's are housed.  There's a small BPF not mentioned in the diagram above.  But it's shown in the two images below.  It's a simple "Mini-Circuits" 50 Mhz Band Pass Filter. 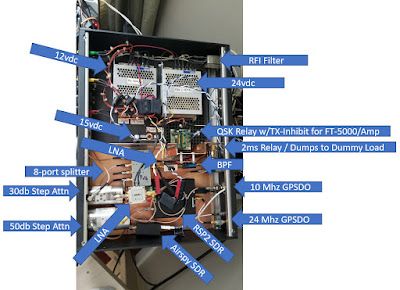 I also use (between the Amp and the and the Antenna) a High Power "4O3A Bandpass Filter" for 50 Mhz.  Not only does this help for controlling out of band TX, but it also helps reduce the crap hitting the RX Port on the FTDX-5000.  This is one of those things that's probably not required for the RX but I think it helps.  I had it on-hand, so I use it.  Just like the FTDX-5000.
There's also a fair amount of circuitry that I've put in place to handle 'sequencing'  All of which takes <= 6ms to occur.  The FTDX-5000 PTT connects to a QSK-sequencer that has 4 ports.  The first output port connects to a 2ms relay that switches a 12v reed relay which controls a 5vdc line for a Mini-Circuits RF relay which can switch in 2ms also.  This relay dumps RX into a Dummy Load when energized.  Effectively placing the SDR's connected to the splitter on the Dummy Load.  This helps reduce the TX signals I create considerably!  The 2nd port then fires which keys the RF Amp.  The 3rd port is skipped currently and the 4th port triggers the FTDX-5000's "TX-Inhibit" line releasing the Transmitter to send RF OUT.
This chain of events means that if the SEQ fails the TX will not flow out the amp.  Because I'm using the radio's built-in "TX-Inhibit" function.  It also means that RF Output only can occur when the SDR is NOT listening to a 50 Ohm Dummy Load (safely).
AGAIN this whole sequencing section is my personal preference.  I suspect that it's not required.  I know that I've run this system without it and incurred no damage.
Using the RX IN/OUT ports to feed the SDR really is probably enough protection.  But like I said I've gone a bit over-kill.
I would also suggest (not pictured in any of this) using a "Powered USB Hub" and a USB 3.0 port if you have one, and nothing less than a USB 2.0 port!  Using a Powered USB Hub helps keep the proper power on the USB connection.  In case you have a lot of USB 'things' connected - using a HUB insures that there's no voltage sag on the USB line feeding the SDR.
ALSO make sure you're power source for the Power USB Hub is CLEAN!  Don't just assume it is.  Test various power sources to make sure you aren't seeing Noise from the Power supply.
If you use Wired Ethernet...you'll probably want to consider wrapping it around a "Mix 43" Toroid Doughnut.  This will just about eliminate any stray RF if you're already using CAT 6. 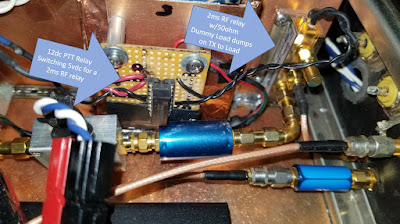 The blue object in the center is an https://www.minicircuits.com/pdfs/SIF-50+.pdf