The first attempt failed to start all 4 supplies in bank 0.

This afternoon I drilled and filed out the new holes for the 6 addition water heating elements being added to double the load test on the power supply from 33 amps to 62 amps.  And also added both a water inlet valve and outlet value (3/4").  This will allow for water flow into and out of the tank.  Cold water comes in the bottom and hot water drains out the top.

For this test I didn't run water flow through it.  I simply filled the can up and ran the test since it was basically a short 'smoke test'. 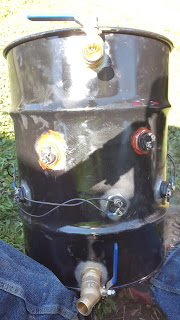 I ran into two small issues this time around.    I was only running "bank 0" so 4 each 13.5vdc supplies in series.  Instead of bank 0 and bank 1 which would be 8 supplies.  The idea was to put a good strain on the system.

So what I found is that the 'final' dual diode warms up pretty good.  I measured about 150F on it which is too high. I need to heat sink those final diodes and possibly even add a fan, or TEC to them to really keep them cool when there's load.  This test was just between 1/2 and a 3/4 load test.  75 amps would = 3/4 and this was drawing 62 amps.

These diodes are rated for 150v @ 100 amps.  The power supply bank that feeds them is capable of 100 amps.  However I am running two wires from the positive side out which split the load one wire goes to one of the dual diodes sides the other wire to other side.  I suspect this is sharing the load somewhat but I haven't tested that.  I might not be too :-)  Won't know for sure until I test it out next time.

I also found that the protection diodes on the power supplies where about 90F.  This could just be heating up from the power supply they're connected to...and not because they're taking any sort of load (because they shouldn't be).

I found that with this much load on the system instantly at start up...all of the power supplies didn't want to come up.  The first attempt I had about 26v the second was 53v the third try was 40v.  So what's happening is that these power supplies don't like having that heavy load placed on them instantly at start up and they'll power down (what appeared to be randomly).

This didn't happen when I was pulling 33 amps.  This is the first I've seen it happen, so the load test process is helping me find things I need to address.

I have been thinking for a while that I need a FINAL relay that can be controlled from a few places.  Like when the output voltage isn't where it should be for one of the banks I would want to OPEN the FINAL RELAY.

But also to solve this 'instant load at startup' instability (which won't actually happen when I'm using this with the SSPA anyway, but I'm just trying to make this be robust and survive me being stupid in the future.  So to solve that I just need to add a timer to control a final relay and tell it to wait 10 seconds while the supplies startup and stabilize, and then close the relay and draw power as needed.

I've thought I needed something like that for a while, but I've been putting it off.