Today I started putting the Nvidia TK1 and Odroid XU3 in aluminum cases.

The TK1 has an SSD mounted inside the case, as well as a fan for air-flow.

The Odroid will just get a fan for air-flow.

Both cases are fixed to a thick double-sided copper PCB.  This will be used as a shelf inside the large "system box" everything will eventually be mounted in.  The Copper PCB will be grounded, and thus both systems will share a common ground as well.  This should help keep RFI down, and hopefully help reduce possible ground loops.

Everything that goes into the "system box" will share a common ground.  The system box will also get grounded to the Vehicle Chassis.  Bottom line here is that we only want the RTL SDR's to hear RF and NOT RFI (interference from the vehicle, or internal system noises).

We want to hear POWER LINE Noise and not noise we are generating.

Anyway, here are some photo's of what I've completed so far.  There is a LOT more to be done.  By the time this is all completed, there will be at least 3 similar PCB shelves that will fit into the "system box".  Possible four levels.  Each level (I'm hoping) will be RF isolated from the others.  This is really me just being super cautious about not generating internal noise.

So here is what I have so far.  The TK1 is the larger case.  I'm not spending a lot of time making this 'pretty' so cut holes are a tad rough looking, but functional.  The Fan in rear forces air into the case, and over the SSD and TK1 board, and out through the face plate where I just cut a long horizontal slot type hole to accomodate the various inputs and outputs.  I left enough space so that air would be able to flow out of this slot as well.

I haven't completed the case for the Odroid XU3 yet.  I'm waiting for some special PCB 'standoffs' to arrive before I tackle that one.  It's a smaller case, but will have the same size fan as the TK1 and similar inlet/outlet holes cut into the butt and face-plates. 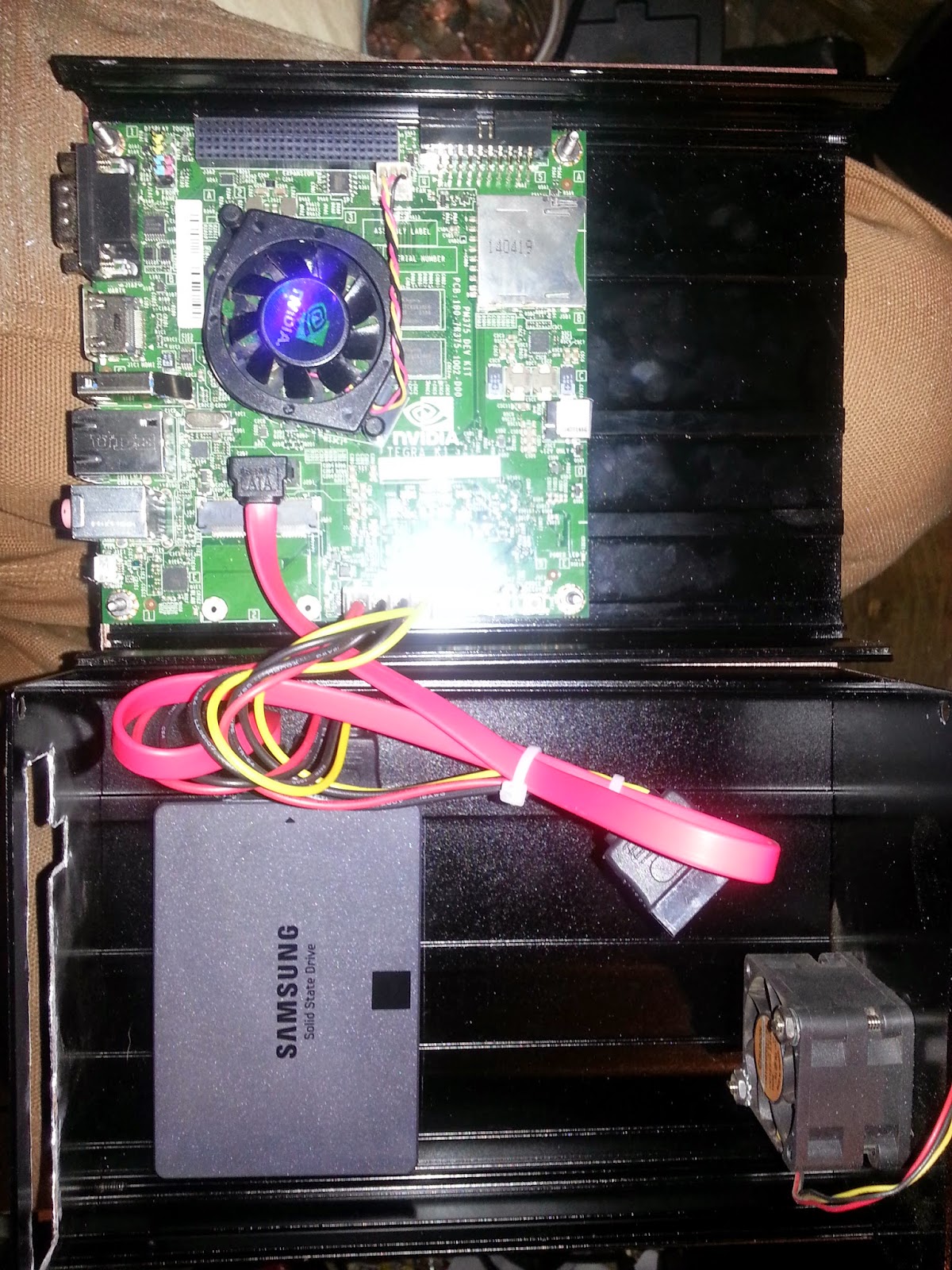 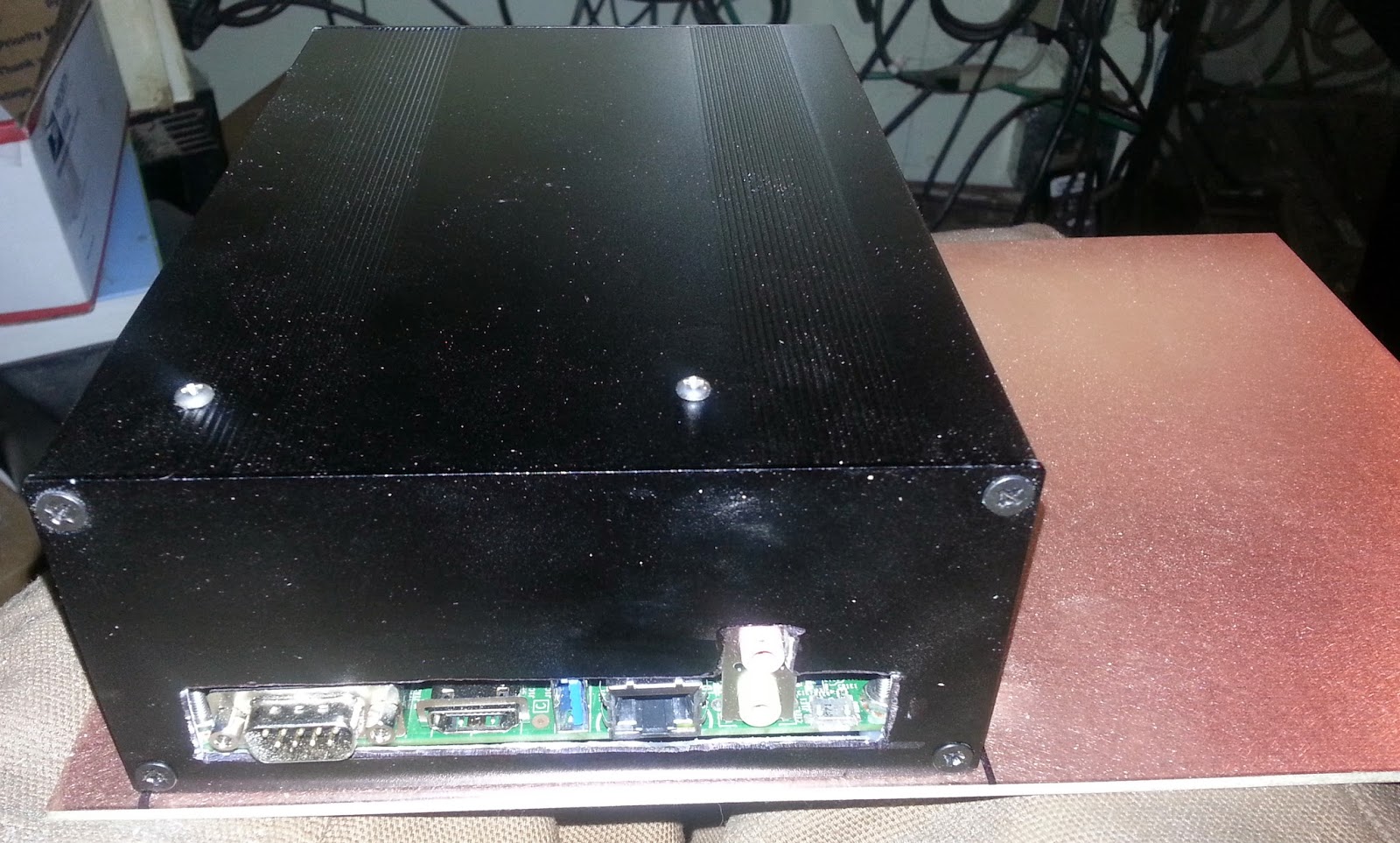 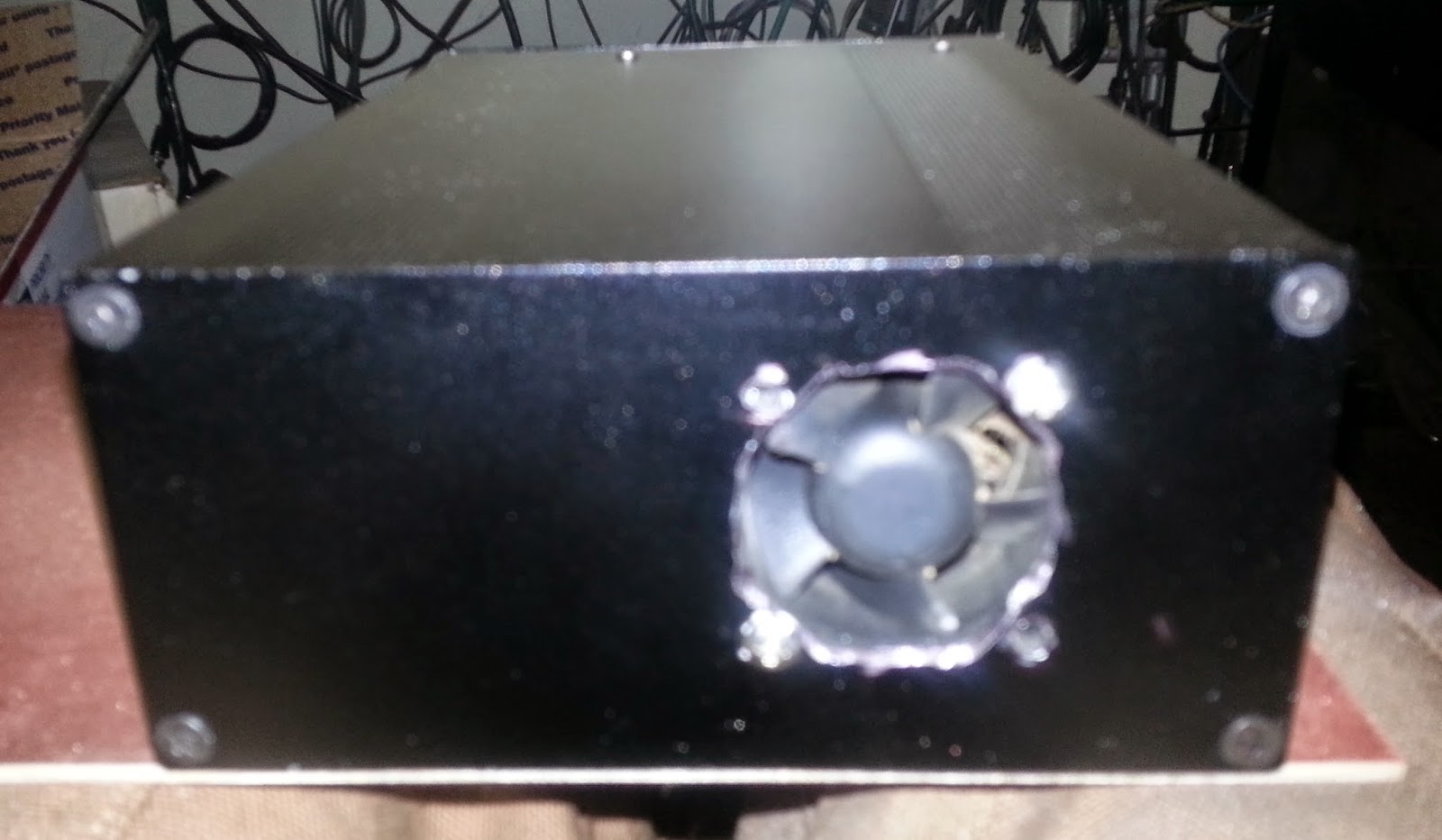 Below are now mounted in a rack mountable box (tk1 left, xu3 right) 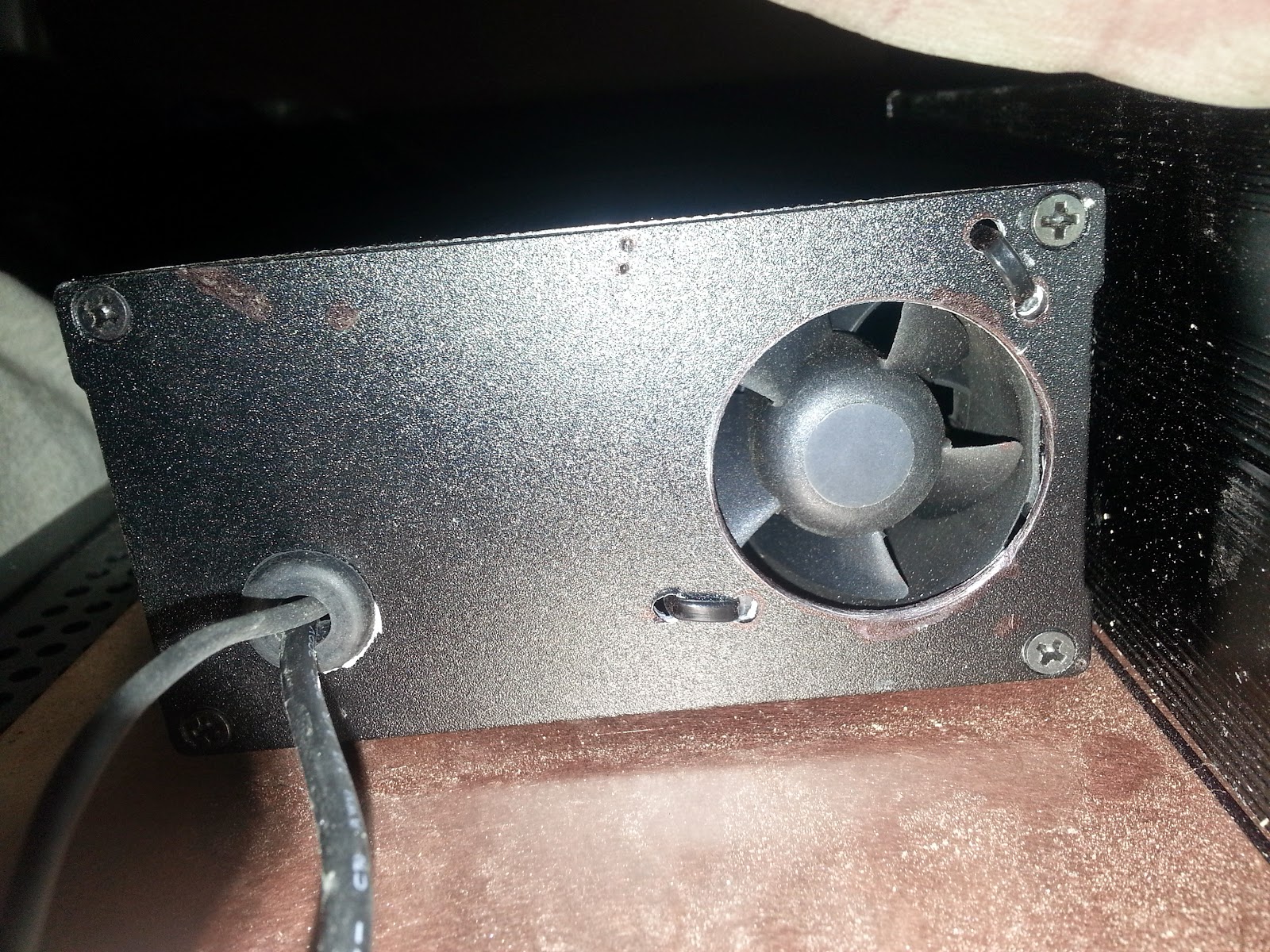 (odroid xu3 back with fan) 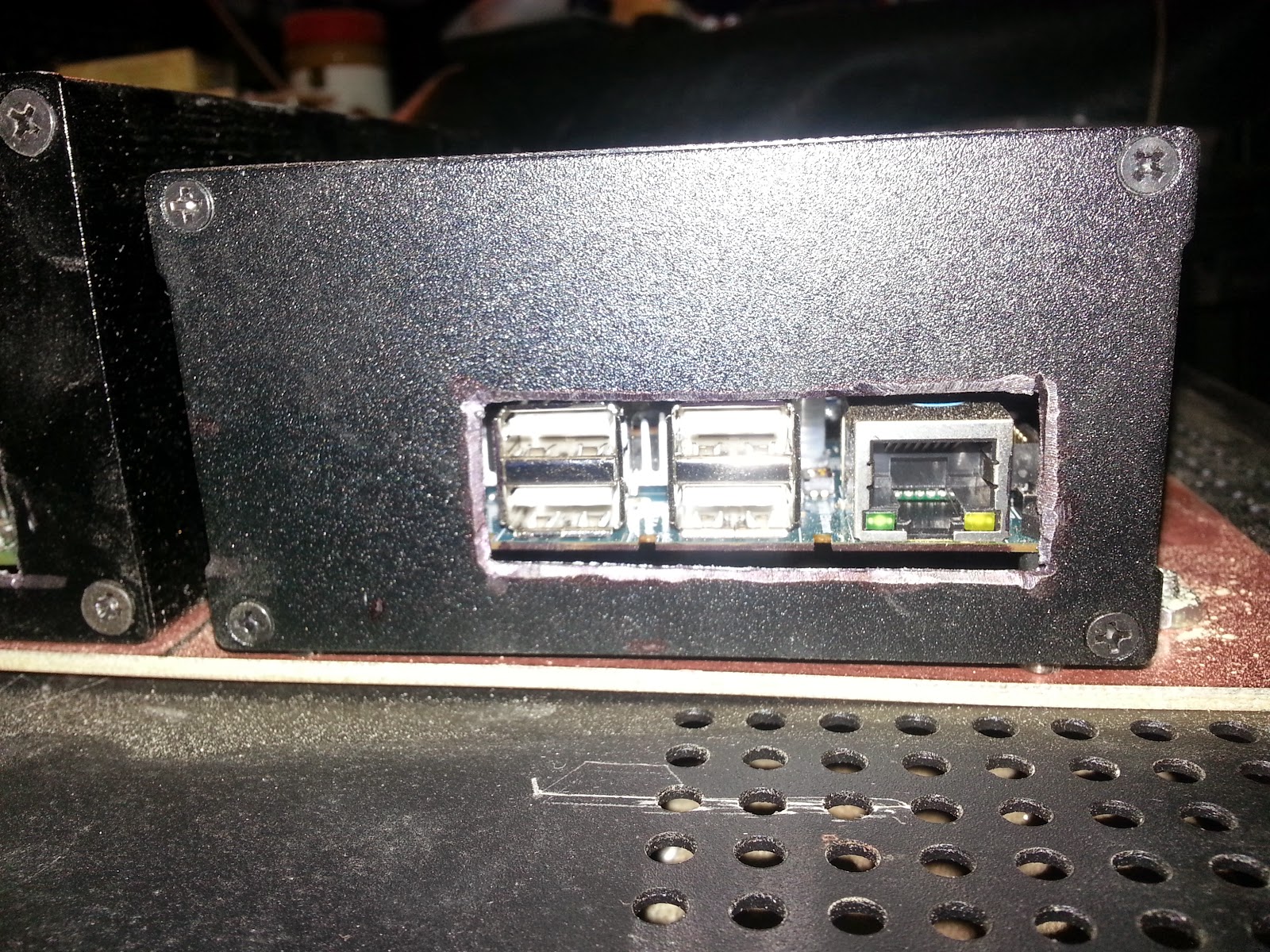 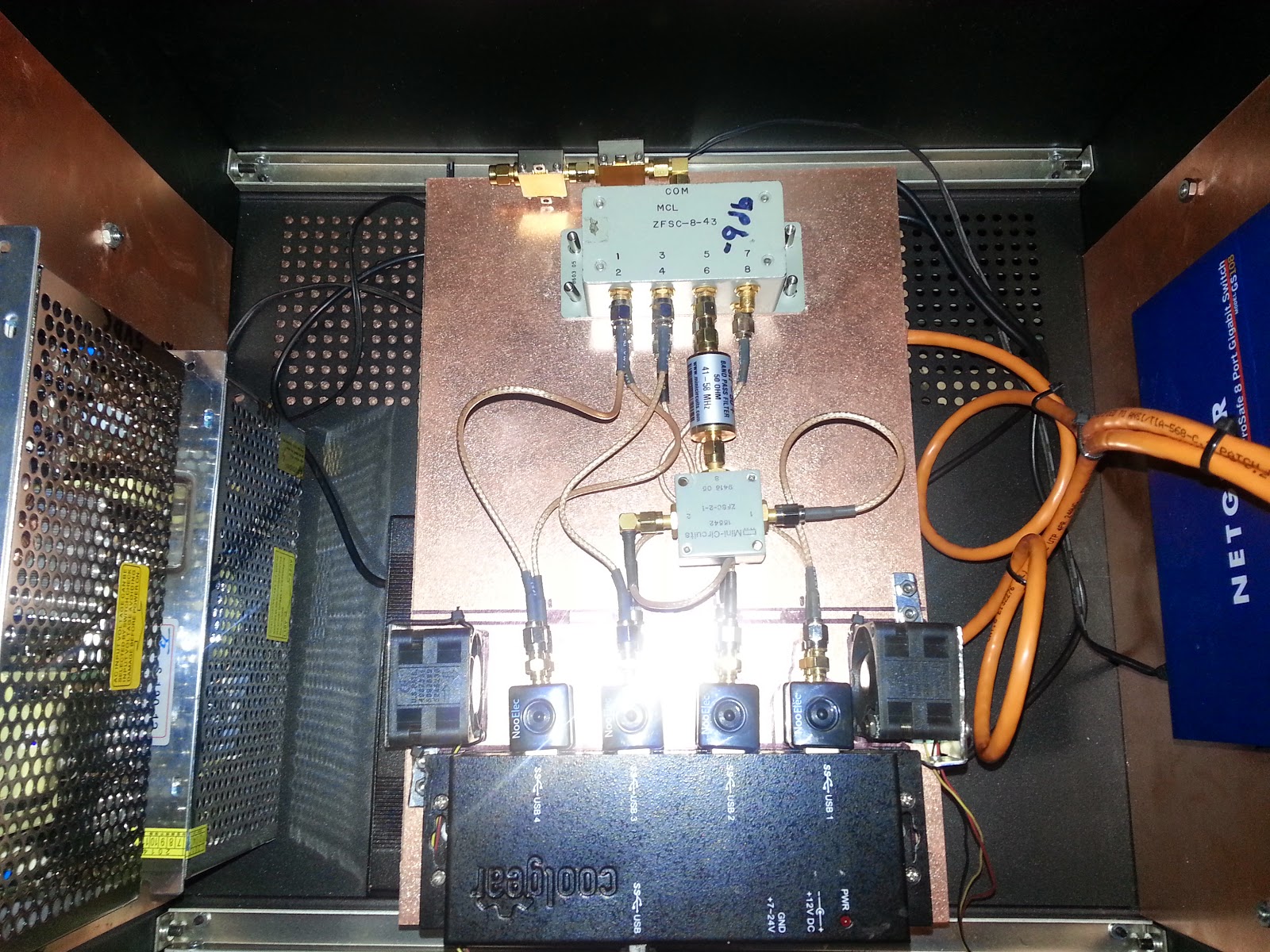 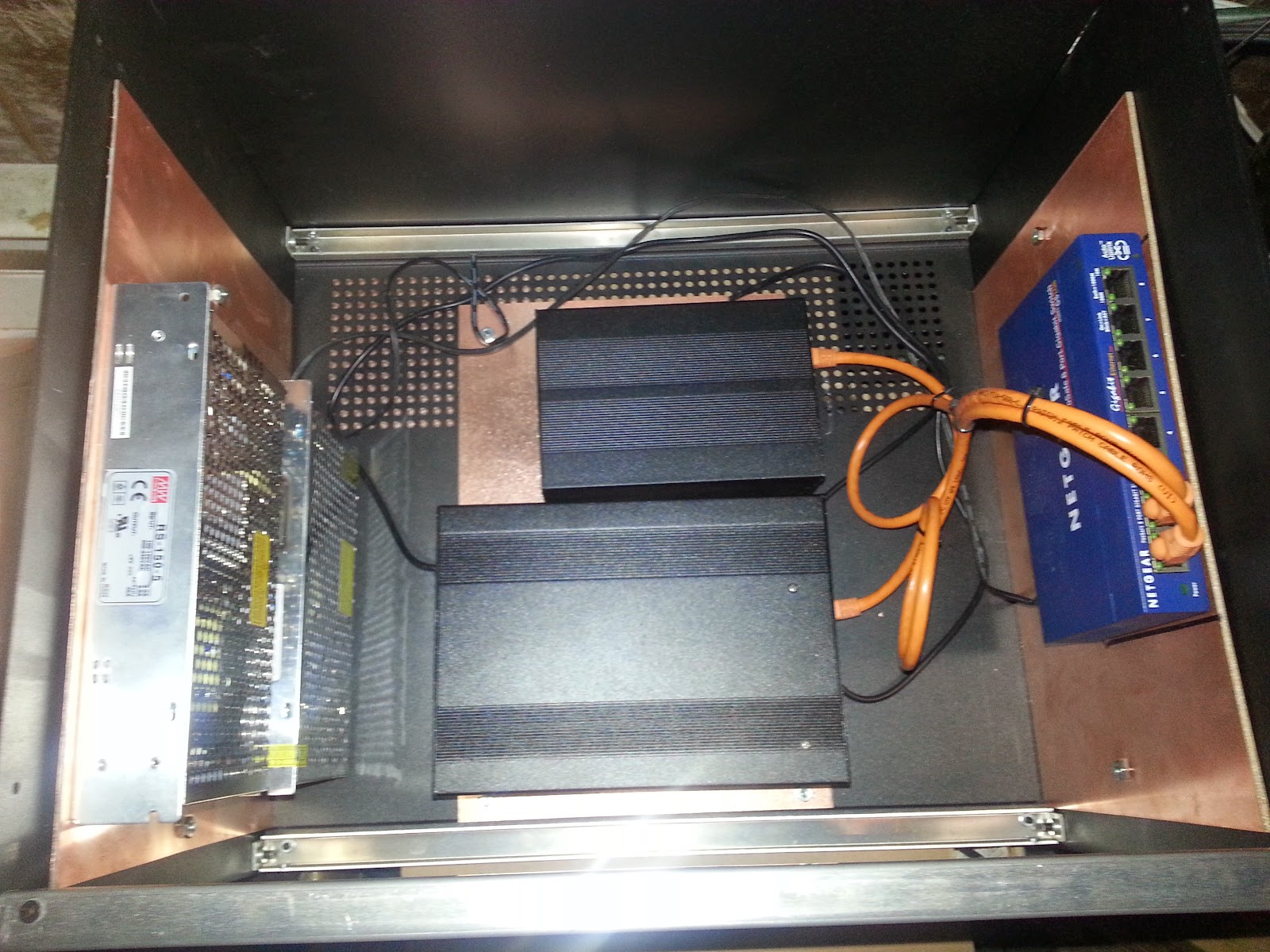 Here you can see that we will be able to use up to 8 RTL SDR Dongles at the same time
This has not yet been completed.  I'm working on building a box that will create a wind tunnel between the inlet fan (right) and the exhaust fan (left) which will keep a very high air-flow around all 8 dongles.  These tend to get very hot to the touch when in operation at 2msps! 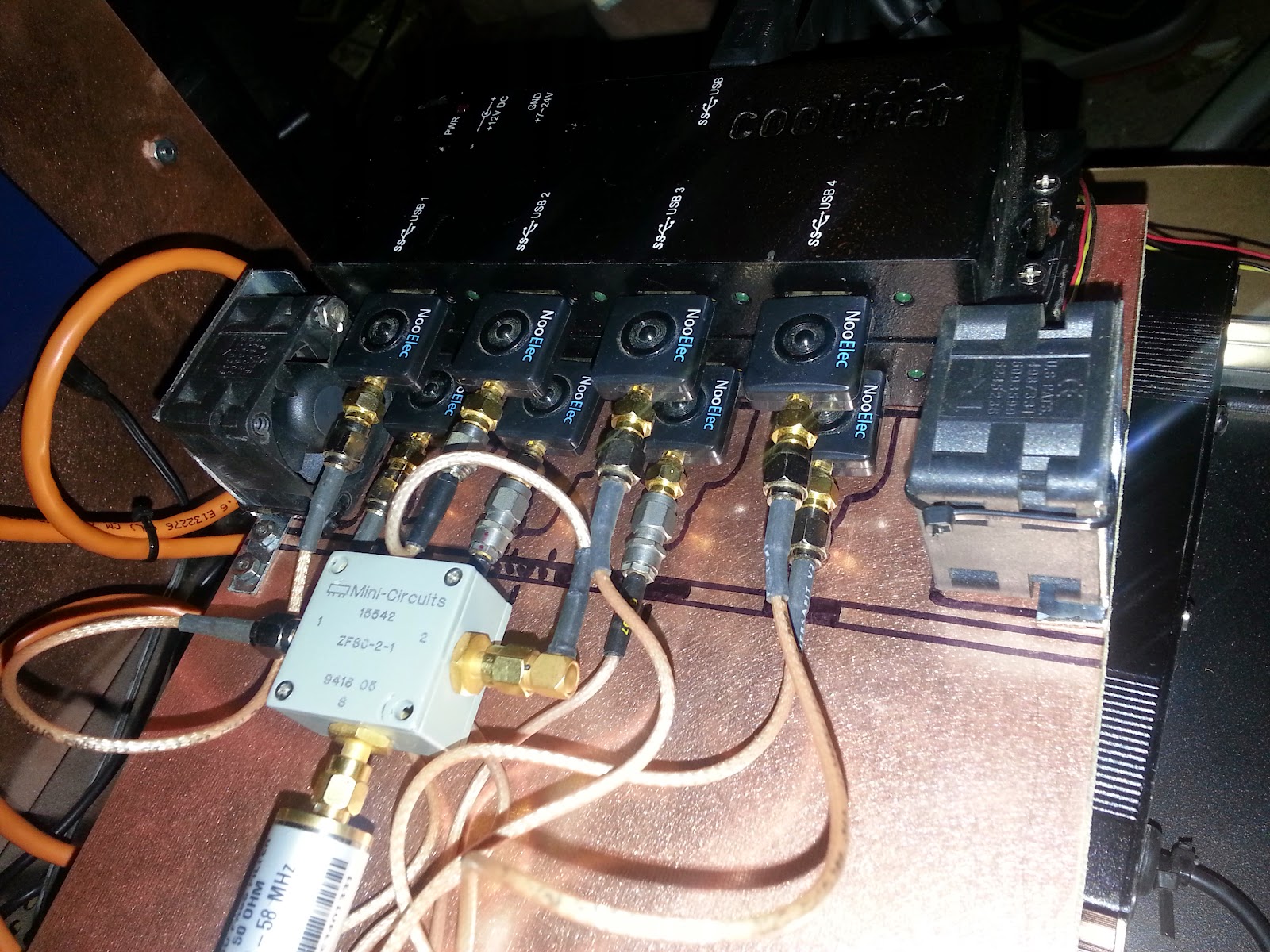 Below shows final placement of most of the gear in this project.  There are a few more things to mount like the volt and amp meters for 12v and 5v, some fuses, and AC filter connector for the AC line that will feed the two Mean Well power supplies for 12v and 5vdc (shown right side). 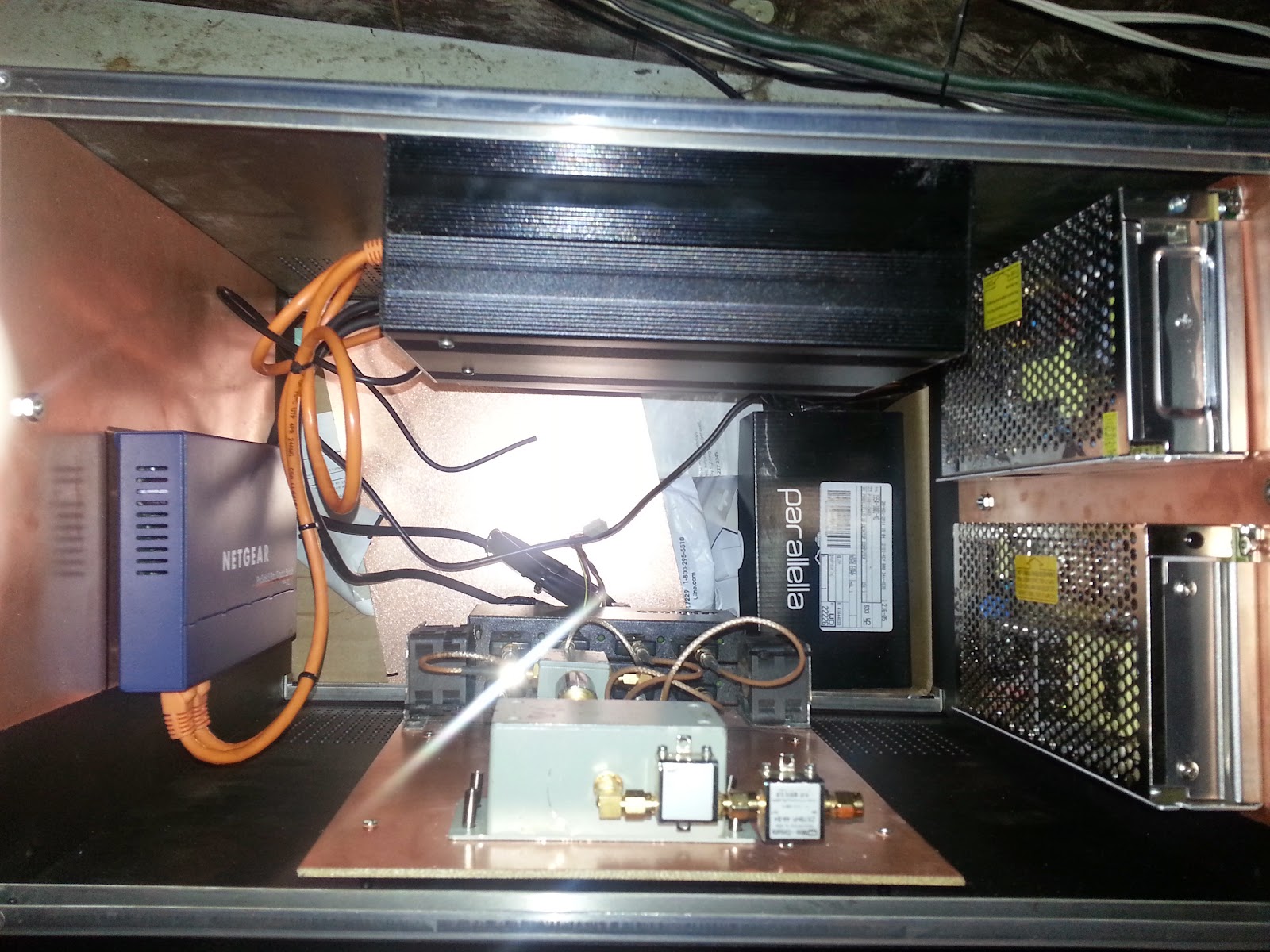 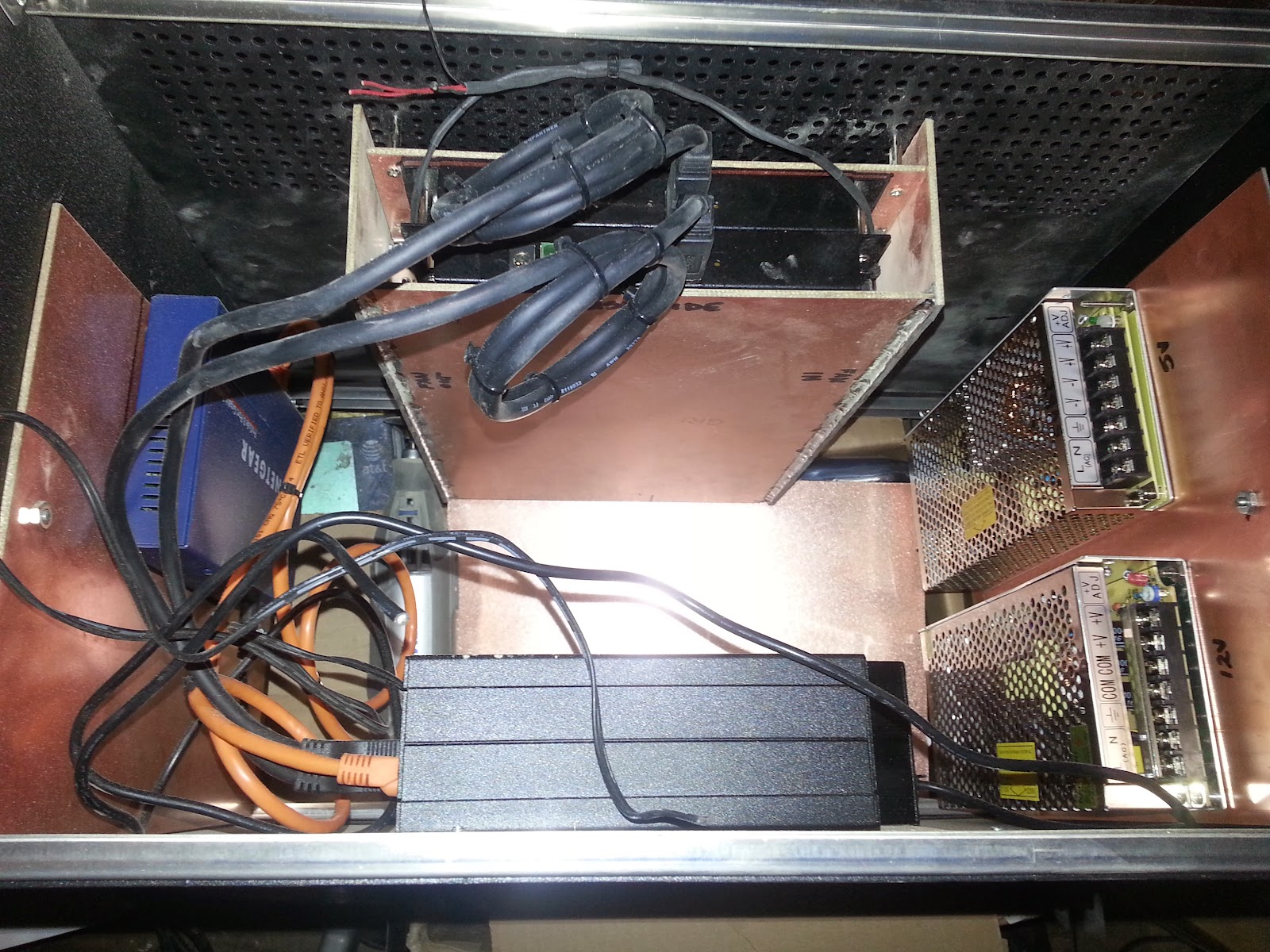 (back & now with RF shielding around USB and RTL's)